Back in February, I visited the brand new Peter Manning NYC (PMNYC) Fit Shop in Manhattan. It was their second day open and I was lucky enough to meet the founder, Peter himself. We spoke a bit about style. I told him that I run a men’s style blog, and I tried on a bunch of clothing. 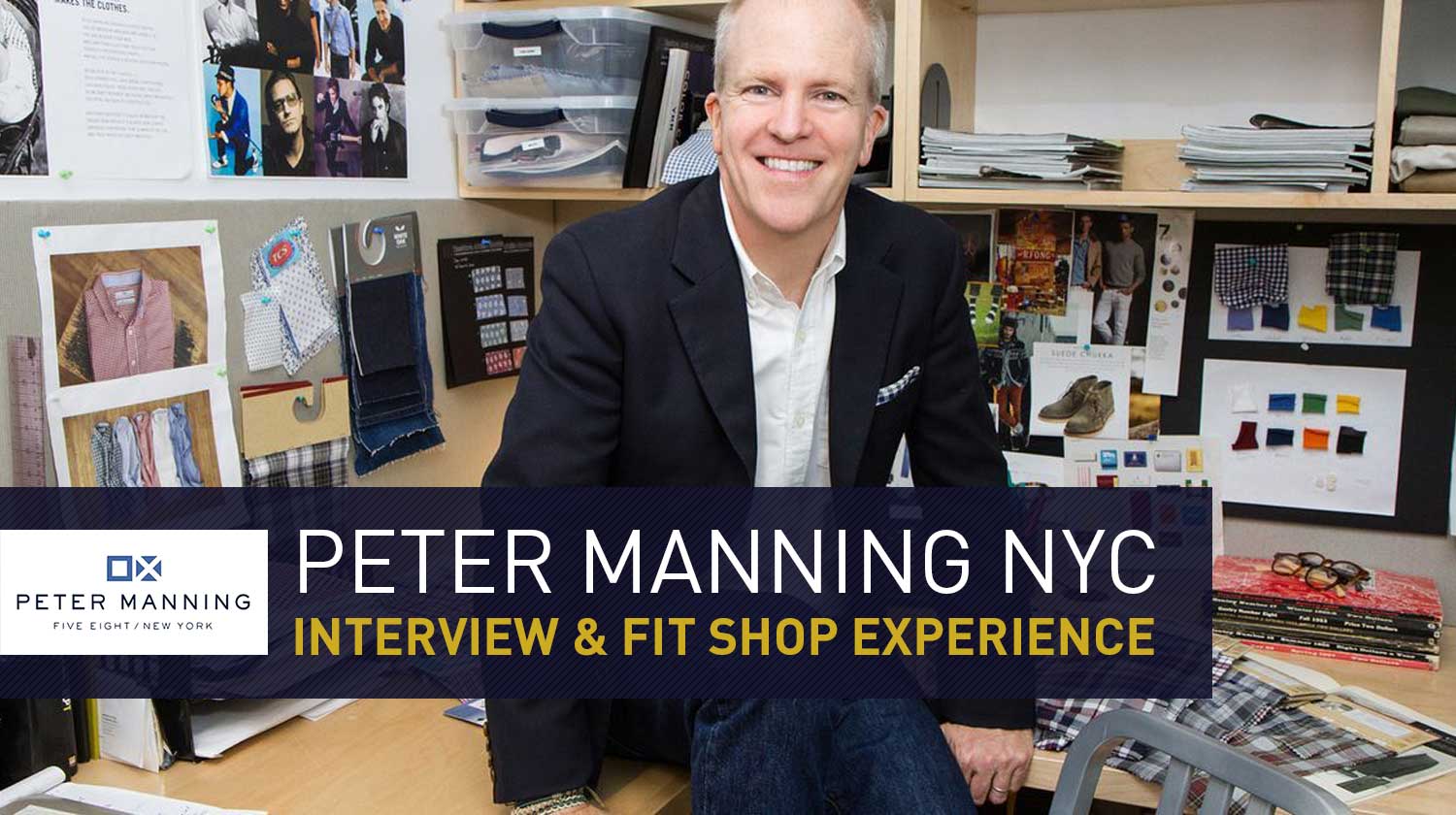 In this article I’m going to talk about my visit to the new fit shop. And then I’m going to share an exclusive interview with Peter himself. You’ll read about the inspiration behind the brand, what he would be doing if PMNYC didn’t exist, and what to expect from them in the coming year and beyond.

But first, a little background on PMNYC.

The Peter Manning NYC Story | Why We Started This Company
It’s always good to start with the why behind something. If you have a big enough why, you can do anything. Peter and his team felt strongly to create something that mattered. Something that meant something to someone. When it comes down to it, the Peter Manning story is one of finding the perfect fit. In this case, the perfect fit for the shorter guy.

Peter Manning NYC is a menswear company dedicated to designing stylish and proper fitting clothes for guys 5’8″ and under, what they’ve trademarked as the ‘not-so-tall’ guy.

This is a highly underserved market of roughly 30 million men in the US alone and countless millions more around the world. Many of the major retailers offer big and tall options, but fail to cater to men of modest height. Thankfully there are websites like The Modest Man, run by my buddy Brock, whose mission is to help short(er) men dress better while becoming more confident in the process.

The fit shop is cleanly and spacious with an industrial vibe. The interior features brick walls against white walls, and flawless lighting. It’s a charming space with plenty of character.

When I arrived Peter warmly welcomed me into his shop. He immediately noticed that I was wearing his ever popular Tribeca Field Jacket in tan. (I love the jacket so much that I had to pick up a second in olive.) We spoke style, StyleCon (now Menfluential 2018), and style for the shorter man. Yeah, lots of style.

Afterwards, Peter asked if I’d like to try on some of their product. He gladly assisted me through a wide selection of jeans, chinos, shirts, and jackets. It was my first time trying on their pants and the ravely reviewed Lambskin Leather Jacket, that looked and felt great. And never having owned a genuine leather jacket before, I knew it’d be a worthy addition to my wardrobe. (a handful of years later, it certainly has been.)

A few fittings later, Peter had to get going, so he introduced me to one of his associates who helped me with a few more items. I made sure to hand Peter my business card before he left. After many back and forth emails with his team, we got around to an interview, which you can read in full below. I hope you enjoy it.

Dropped into the new Peter Manning fit shop today. Even met the man himself. If you’re in the Flatiron district or around the area, come check them out!

What was the moment that you knew that Peter Manning NYC had become a reality?

How did you get into menswear, did you always love it?

I did always love clothes as a kid but never thought I would be in menswear. I got into because I wanted clothes that fit and I knew there were other guys like me.

Before Peter Manning, where did you shop for clothes?

I hated shopping because nothing ever fit correctly. I had clothes from Brooks Brothers, J Crew, Banana Republic, The Gap and various other brands from department store, like Bloomingdales. It was when I realized how MUCH I was spending at the tailor that I finally decided to start the business. I knew there had to be a better way.

Where did your inspiration for Peter Manning come from, did you have an aha moment?

I was handing over $1000 to my tailor who was fixing everything down to t-shirts and I decided that their had to be a better way. Also, it was from observing guys whose clothes looked and fit great and wanting to look like that. Us not-so-tall guys know what clothes should look like we just had nowhere to get it.

Have you noticed a renaissance of sorts when it comes to men’s style and men taking better care of themselves and how they dress?

Absolutely. Men care more about what they wear and I think that has helped our guy find us because they want to look great too and have not had options. Men fashion and style is a much bigger story than it was ten years ago. We think that’s great.

30 million men, that’s a lot of guys in the US alone. Why do you think that the big box retailers are so reluctant to serve this market?

I have come to believe it is stigma. Stigma against not-so tall guys, a lack of understanding how best reach them, and the fact that this customer hasn’t had a way to communicate to retailers their needs. We always say there are not guys walking around naked. Our customer has made do, but it hasn’t felt or fit great.

Peter Manning features high quality, classic clothing for men of modest height (5’8″ and under), a highly underserved category in menswear. Thier new fit shop in Manhattan looks gorgeous. Come see for yourself.

In “The Story of Peter Manning, a short film” you mentioned it all began because you wanted a pair of bell-bottoms…what about a line of PMNYC bell-bottoms?

No Bell Bottoms. But the Bell Bottoms are really a metaphor for the not-so-tall guy wanting and needing the same things that every guy wants and not being able to get them. We are changing that.

Was there any other names that you considered or did you always know you wanted to name your clothing company after yourself?

I definitely did not intend to use my name. My working title was Five Eight/New York, which is still part of our brand name and logo. I met with a branding firm very early on and they encouraged me to use my name, because it such was good name for a mens wear line (of any kind) and it would resonate with the customer because I was in the same boat. I came around to it reluctantly but it was the right decision.

Sometimes it’s tough to find the right wording. How long did it take for you guys to land on ‘not-so-tall’?

It is tough. As noted above, there is a stigma that we deal with and we do try to avoid the word “short”. We worked with “5’8” and under” for a while. My partner, Jeff Hansen, came up with “not-so-tall”. It felt right and we think our customers appreciate it. We want to do whatever we can for this guy to come on board because wearing clothes that fit is transformative. It really is.

What would you be doing if Peter Manning NYC didn’t exist?

Big Question. At this point in my life, I would probably being doing something mission driven where I would be spending the majority of my time helping those in need. Not sure exactly what that would look like.

Sneak preview of what’s next on GentlemanWithin.com. Guess where this was taken?

What has been the biggest struggle for Peter Manning NYC as a small company that’s grown so much in the last few years?

As we grow, one of our biggest challenges is keeping inventory in stock but we have come a long way and thankfully and gratefully our customer is patient. Our other biggest challenge is getting the word out. We are a new category in Menswear. Reaching the 5’8” and under man is tricky. It’s frustrating because we know that once they try us they’ll love it, it is just finding them and getting them over the initial reluctance that takes a lot of work.

Is there anything you can say about new offerings from Peter Manning NYC in the coming year and beyond?

We will be introducing a new cotton sweater, a performance Hoodie and Sweatpant and a down jacket that we are excited about and we’ll be deepening inventory in the products we already have. We also are exploring some new size categories, for some slimmer and some bigger guys.

What are your short-term and long-term goals for Peter Manning NYC? Where do you see yourselves in the next year, 5 years?

Our short-term goal is to grow our customer base. We know there are so many guys who still don’t know about us and would be as passionate about us as our current customers. Over the next five years, as we continue to grow the brand awareness, we are looking to add products that our customer wants and needs and grow our Fit Shop model and expand it to cities around the country.

Why do you think that the Peter Manning message resonates so strongly with customers?

I think our message resonates because we are addressing a real need. There is an emotional component to what we do. This customer has been ignored by the apparel industry for their entire life, whether they are twenty-five or seventy-five and it doesn’t feel great. Our customer knows we really care about them.

If you’re a regular reader of Gentleman Within, then you know the importance of wearing clothing that fits. For most of my teenage life, I wore ill-fitting clothing because baggy was the trend. As a young adult, my clothes didn’t fit because most major retailers simply shun any guy under the average male height of 5’10”.

It’s because they are providing the ‘not-so-tall’ guy with a solution to a problem that’s ailed him all his life, that the Peter Manning story resonates so strongly with me. For the record, I’m around 5’5″.

If you’re a shorter gentleman, 5’8″ or under living in or around NYC, I highly recommend you check out their fit shop in person. You can find your size and try all of their products. They’ll even ship same day, free of charge.

I want to end this by saying thank you to Peter and his team for taking the time to coordinate this interview.

What are your thoughts about Peter Manning NYC? 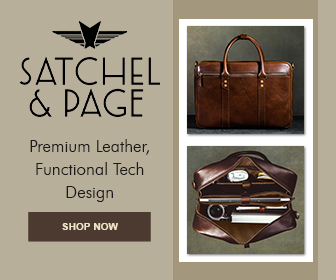 Packing with the stylish @level8_official.

I left the advertising industry as a creative, transitioning into a full-time style blogger. Now I help regular guys dress better and live with more confidence. Read More…