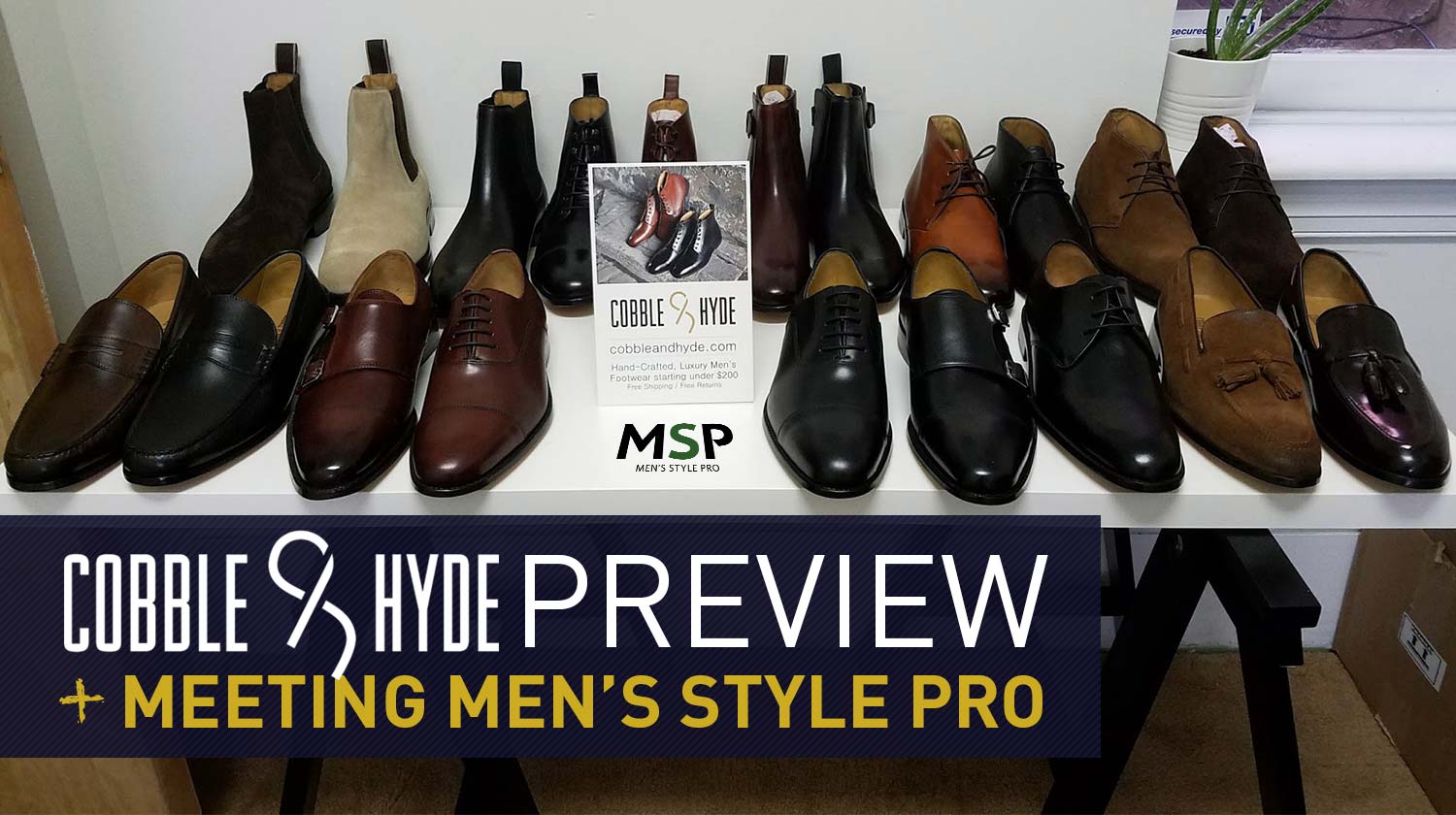 Okay, so I’m guilty of being unaware of what a press and buyer preview was, but it’s exactly what it sounds like. It’s where press and potential buyers can ask questions and get to know the brand/s hosting the event.

When I arrived at Men’s Style Pro Headquarters (MSP HQ), I met two of the three Cobble & Hyde founders, Bart Nydish, and his son Sanford Nydish. Their other partner, Bob Kahn had left before I got there. Sanford told me that Bob always had a passion for shoes and that his family owned a shoe factory and tannery back home in India. Bob later moved to the US and partnered with Bart and Sanford and that gave birth to C&H.

Since they’re direct-to-consumer, Cobble & Hyde is able to keep its offering at an affordable price point (under $200 for shoes).

Swipe to the left for a look at the Spring 2017 @cobbleandhyde Press & Buyer Preview hosted by @mensstylepro last week. Editorial coming up next on the blog.

You can scroll through the images above.

Cobble & Hyde offers quality handmade leather shoes, online. Having officially launched in November 2015, it seems that C&H is a newcomer in the handcrafted men’s shoe arena, but they have deep roots in the footwear industry.

For over 35 years they’ve designed and sourced shoes for other well-known brands before becoming a national brand themselves. From chelseas to chukkas and dress boots to monk straps, Cobble & Hyde has all the footwear essentials a man would need.

Artisans in England produce the ‘last’ which is the foot shaped form that is the foundation of building any shoe. And their in-house designer collaborates with designers in Italy to create the shoes themselves.

It seems that their smallest size is an 8, which is unfortunate because ideally, I’m a 7.5 and was looking forward to trying a pair. Since I can fit into some 8s, so I may have to try them out to see how those fit. I’ve been looking into pair of tassel loafers, and their snuff suede pair looks and feels amazing.

Interested in their shoe production process? Here’s how Cobble & Hyde shoes are made, step by step.

Fun fact: Each pair of C&H shoes is named after a subway stop in London.

So how did I even find out about Cobble & Hyde?

TL;DR: Sabir M. Peele, the Founder and Creative Director of Men’s Style Pro reached out and asked if I was interested in coming out to an event he was hosting featuring one of his clients, Cobble & Hyde. Since you don’t always get the chance to see online brands in person, I jumped at the opportunity.

Had to get a selfie w/@esquire and @gq’s best dressed. Sabir, you are one cool cat. Thanks for having me out at the new digs for the @cobbleandhyde preview. ?‍♂️ #businessgoals #inspired

So who is Sabir M. Peele and why was I so pumped up to meet him?

In short, Sabir is a freelance brand ambassador & executive style for GQ and consults for numerous brands—all the while, running the ship at Men’s Style Pro.

He first attracted the attention of the national style media and was named one of Esquire Magazine’s “5 Best Dressed Real Men in America” and in addition was the winner of the Fan Favorite vote. In the fall of 2013, Sabir was selected by GQ Magazine as their #GQFall Best Dressed.

His resume in the menswear world is impressive, and he’s as down to earth as they come. To quote Hamilton the Musical, “He seems approachable, like you could grab a beer with him!”

Interested in hearing about my experience at MSP HQ? Read on!

The event was last Thursday, April 13th. To my surprise, Sabir messaged me the night before, extending an invite to his event hosted at his new location in Philly. It’s rare that you get to see online brands in person. And having never been to a press and buyer preview, I thought it would be a great experience. My dental procedure for that afternoon was swiftly rescheduled.

Being a young blogger, I know I should attend industry events, and shake as many hands as I can.

I’m slowly learning that in business, much like in life—if you don’t put yourself out there, and try to experience new things—you’ll never know what you’re capable of. For me, right now, every industry event that I’m invited to should be a YES. Because who knows the connections I can make that will potentially open the door to new opportunities.

In under 2 hours I met a stylist who works with NFL players, the founder and a stylist from Commonwealth Proper: Bespoke Custom Suits, and the Co-Founder/President of Damari Savile, a custom suiting company that will be launching soon. I even met Sabir’s massage therapist who happens to be in the same building as him. How sweet is that?

Sabir and I talked about the style blogging journey, other style bloggers in the industry, and where MSP is headed. All in all, it was a great time hanging out and picking his brain.

I felt welcomed, like I was a part of the community. The realization hit me that I’m in the industry and there’s no turning back now. It’s the same feeling I get any time I’m around other like-minded individuals, whether it be at a conference or during collaborations.

I always learn so much when I meet industry veterans like Sabir. I imagine the feeling of being a rookie in the NBA, meeting legends on the court for the first time.

The admiration is there, but I also realize that I’m on the court now, and that as a professional, I’ve got to do the work. No one’s going to do it for me, I have continue creating. The journey is long and I’ve gotta keep on walking.

Style and Bourbon w/@mensstylepro and @dieproper at MSP HQ for their press & buyer preview of @cobbleandhyde shoes. ??

They’re my peers now. Though I’m not anywhere near their level, the fact that I’m on the court with them gives me a sense of pride and that fuels my purpose. I know why I’m doing this, and I feel like I belong—that if I keep pushing, I’ll eventually make it.

While I was there, I thought to myself, man I’m really doing this. I’m in the blogging game, trying to make a name for myself and leave some sort of impact, even if it’s in some small way.

I’m not sure why I was nervous at all. It was like hanging with a longtime friend. And the bourbon helped.

After a chat with Sanford, I can tell that Cobble & Hyde is serious about creating quality shoes that will last for a long time. They’ll be revamping their site soon and working with influencers as they continue to grow. Cobble & Hyde surely is a brand to look out for in 2017 and beyond.

If you’re looking for quality, hand-crafted shoes at an affordable price point, be sure to check them out. With free shipping and free returns, there’s no risk in trying them out to see if it’s a good fit.

I’m so glad I made it out for my first and hopefully not my last preview. Thanks to MSP and C&H for the warm welcome.

WHAT DO YOU THINK OF COBBLE & HYDE SHOES?