In this article I’m going to talk about a man’s style journey and whether or not style matters. Umm, but Khoi, didn’t you write a piece about why style is worth caring about? I did, but hear me out… 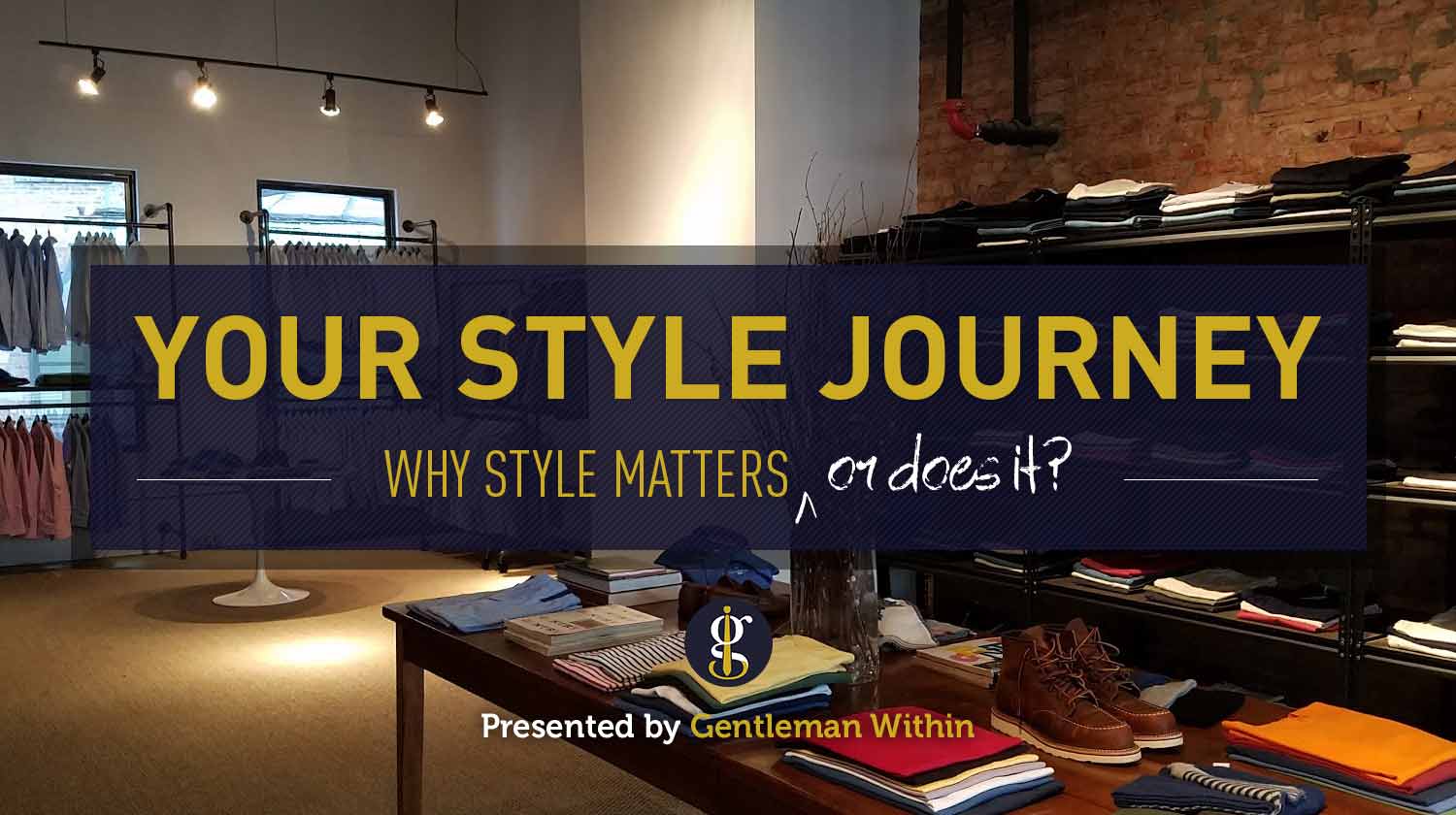 It’s pretty cliché, but life is a journey. A wondrous ride filled with endless ups and downs, stagnation and breakthroughs.

In life—isn’t it all about the process of getting to wherever it is that you’re seeking to go? It’s about the people you meet, the things you learn, the discoveries you make, the experiences you have, and create along the way.

As you proceed, you’ll travel along various mini-journeys—one of them being the undefined path towards discovering your personal style. As with life, there are phases of a man’s style journey.

We all start off as beginners, then achieve some level of competence, and finally become an expert. Easy as 1, 2, 3…right?

As a man progresses from one level to the next, style becomes less important. I’ll explain why, but first I want to share the steps every man takes along his journey to better style.

Before getting into why style becomes less important, I want to talk about a few things I recently thought about. It’s a simple 3-step model of the style journey that all men must go through, inspired by the Dreyfus model of skill acquisition.

Keep in mind that levels exist in-between each step, and the distance between each level is not to scale. Again, it’s simplified down to 3.

It’s a feat in itself to reach Starter Style (SS) status. So pat yourself on the back. That means you get it. You’ve taken the first step in consciously embarking on your style journey. This is the stage where mistakes will be made, tons of mistakes. But that’s a good thing as long as you’re willing to learn along the way. A man that’s achieved SS may be guilty of impulse purchases when he goes to the mall or shops online. But that’s okay because it’s all a part of the process.

SS is comparable to being a freshman in college where you’ve finally decided on your given major, and now the real education begins. This is where understanding of fit and the fundamentals of style are crucial. It’s a time to experiment a little, but more importantly get the basics down. A basic white tee, dark wash denim, a navy blazer, and a pair of brown shoes, for example, are hallmarks of a well-dressed man’s wardrobe.

This is where the fun really begins and when style should matter the most to a man.

Congratulations! You’ve arrived at the stage that most men fail to reach. It takes time and practice to breakthrough SS into Clothing Competence (CC). At this stage, a man understands all of the fundamentals and basics. He has a good grasp of what he likes and dislikes. He knows what looks flatter his body type, and colors that go well with his skin type.

Not only is he highly experimental with his style, he’s constantly challenging himself to break out of his comfort zone. This is a stage where a man begins to refine his personal style, even though it’s still very much a work in progress. Rules are broken and mistakes still made.

A man that’s achieved CC takes inventory of what’s in his wardrobe—the pieces he still needs, and items that are no longer appropriate for his lifestyle—or no longer represents who he is as a man. Many of the style staples have been acquired or will be soon. A man’s wardrobe fills quickly during this stage. We’re talking about a pair of chinos he likes in several different colors. Shoes overflow by the dozens and precious closet space begins bursting at the seams. Purchases are no longer made on impulse or whenever there’s a deal too good to pass up.

Ultimately, he becomes more deliberate in deciding what makes it into his wardrobe and that’s a beautiful thing.

CC is a long stage where the most learning happens. It’s like graduating from college and getting out in the real world, finding out what it’s like to live independently. At this stage, style matters to a man, but less than when he was just beginning. It’s something that’s important to him, something that he still studies, but at the end of the day, he’s confident in his personal style and has other dragons to slay.


A level seldom reached by man because it’s friggin’ hard to get there. We’re talking going pro. It’s a transcendence that mere mortals suffer many a trial and error in order to claim the title of Sartorial Mastery (SM). It’s a transformation. A man who’s achieved SM is like a phoenix rising from the very ashes of his former self.

At this level, a man has supreme confidence in his style. The way he moves and presents himself to the world is the best version of himself, because he owns his style and more importantly himself. He’s pared down his wardrobe to his essentials, not what some list tells him. It’s refined to his taste. He’s maximized his style potential and possibilities for the stage that he’s at in his life.

At this stage, a man no longer needs to think or care much about style. He is style.

*This 3-Step model is not a science by any means. Merely a systematic way to categorize and determine where a man currently stands in his style journey.

DOES STYLE EVEN MATTER?

If you’re a regular reader, you know my answer. It’s a resounding YES! But once you reach a certain level, should it matter so much? After all, there are ultra successful men who have a ridiculous sense of style. Let’s just say that when you’ve got billions in the bank you can pretty much dress however you’d like.

For the majority of us, however, style does matter…up to a point.

Which point is that? As you approach the tail end of Clothing Competence or have entered Sartorial Mastery, style begins to matter less and less.

Until you reach those levels though, it’s well worth it to care deeply about style. To understand the importance of fit, get a pair of dark wash denim, purchase some great shoes, add accessories into the mix, and experiment with your style.

You’ve Got Dragons To Slay

As good style becomes somewhat second nature to you, it doesn’t mean that it’s any less important. Instead, it holds less importance in where you place it among your priorities.

How Many Times Do You Have To Check Yourself Out Today?

Good style will always be good style, regardless of how many times you check yourself in the mirror, it doesn’t matter.

Do you find yourself constantly fixing your outfit throughout the day or immediately try to clean the littlest scuff on your shoes? There’s no need to fix your tie knot, sleeve cuff or shirt tuck several times a day.

There’s something to be said for deliberate carelessness. In fact, it isn’t a sign of carelessness at all, but of confidence. It’s knowing yourself so well that you don’t have to adjust your outfit every few minutes.

Slowly stop yourself from fixing every minute detail. Dress well each morning and allow for the day to go on. Do what you’ve gotta do like a boss. Let things get disheveled. Know that you left the house looking great and that there’s no need for perfection. Instead allow for deliberate imperfection.

Dress Well Then Let It Go

As with anything in life, once you’ve become adept at a thing, it becomes an afterthought. Think about when you started practicing driving. There were a million thoughts in your mind. Your hands tightly clenching the wheel at 10 and 2, head stiff as a board. Your focus was so intense, you could only think about whether or not to slam the brakes as the light turns yellow. Flash forward a decade and you no longer think about driving, you just drive.

Same goes for style. The more your personal style develops, the less you need to think about it. When you’ve reached a certain level with your style, you get dressed, know you look good and then go about your day.

The most stylish of men don’t think about style all the time. They’ve got their families, their careers, their lives to be lived.

I still believe that style is as important as ever. That all men should understand why style is worth caring about. However, as one progresses in his style journey, the less he should think about it.

I myself am at the point where I shouldn’t think about style so much, but of course it consumes me because I’m a ‘style blogger’ and I write about it on a weekly basis.

Beyond the blog, I don’t spend a lot of time thinking about style anymore. Instead I’m focused on growing Gentleman Within. I’m thinking about my next move in life. Whether I want to pack up and head out west, or really get out of my comfort zone and go abroad.

In the end, the path to developing your personal style is a process. I believe it’s important for a man to consciously refine his style according to age, environment, and lifestyle. And if he ever achieves Sartorial Mastery, to forget all about it.

THAT BEING SAID, WHERE ARE YOU ON YOUR STYLE JOURNEY?