In the sports world, when we think about greatest of all time, a few names spring to mind. 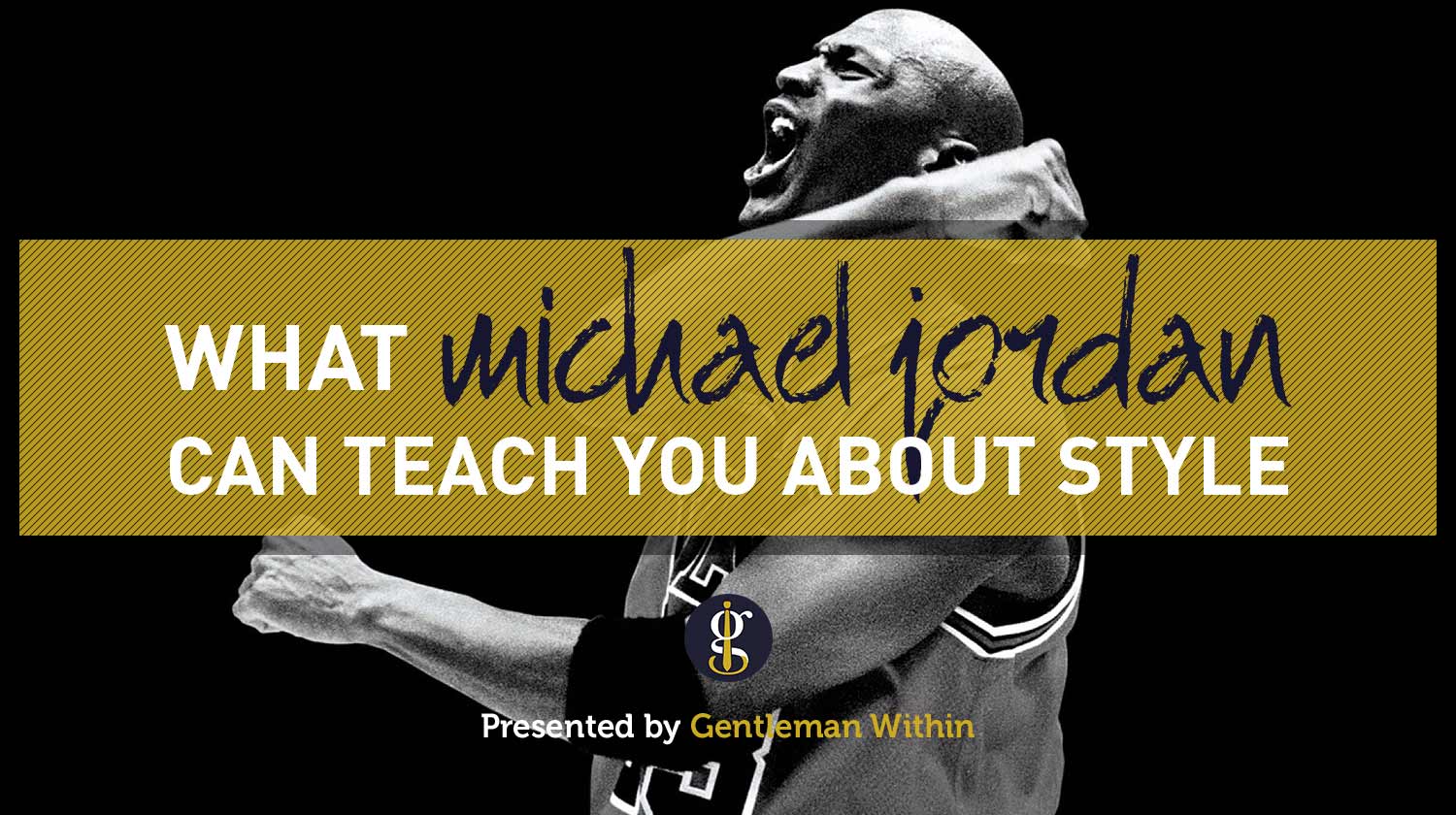 Let’s stop with #23. Already a legend before his first retirement in ’93, he came back wearing the 4-5 (exactly 22 years ago to the date of this writing) and cemented his legacy in storybook fashion by stifling the Utah Jazz in back to back game 6’s. And then returned yet again for a final curtain call with the Washington Wizards.

The man never needed a game 7 in an NBA Finals. Six for Six — perfection. When we talk about ALL-TIME greatness, we talk about Michael Jeffrey Jordan. The GOAT.

All the more impressive that what he achieved on the court, is rivaled by what he’s done off of it. The Jordan brand is one of the most recognizable in the world. According to Forbes his net-worth is 1.3 billion. Not bad for a kid who was cut from his high-school varsity team.

Quick note: If you’d rather listen to this post rather than read it, then I’ve got the audio equivalent for you right here:

Gentleman Within is a style blog at the core, and so I want to talk about what you can learn about style from the legend himself. For the purposes of this article, we’re going to disregard all of his current fashions and instead focus on his spoken words.

Let’s get to it. Here are 7 inspirational Michael Jordan quotes and what they can teach you about style and becoming a better dressed you.

Start With the Fundamentals

“You can practice shooting eight hours a day, but if your technique is wrong, then all you become is very good at shooting the wrong way. Get the fundamentals down and the level of everything you do will rise.” [Tweet this]

Even before the fundamentals, it’s imperative to understand why style matters at all. If you couldn’t care less, chances are you will never even take the first step to improving your style.

And secondly you want to wear clothes that actually fit your body. This is crucial. Understanding this puts you ahead of the majority of guys out there who are drowning in their clothes or on the opposite end, struggling to breathe.

Have you ever bought something that you thought looked great in store or online, but soon realize that it doesn’t go with anything in your wardrobe? You don’t want to pick up clothes if you have no idea what you’re looking for. Take inventory of your current wardrobe, what you really want and need. That way you can make more intentional decisions when it comes to adding or subtracting from your wardrobe.

Additionally, a good fundamentals question to ask yourself is, “am I dressed appropriately for the situation and for my age?” You can be well dressed, but still be out-of-place because you’re clothed outrageously different from everyone else.

Say you love dressing to the nines in a suit and tie. I’m not saying you can’t, but subtlety is an underrated practice that all men can benefit from. As for the second part of the question, a 50-year-old dressing like a teenager may look like he’s going through some sort of mid-life crisis. There is such thing as dressing age appropriate.

All in all, realize that style does matter and wearing clothes that fits makes all the difference. [Tweet this] Get the fundamentals down first, and that knowledge will serve you well for the rest of your style journey.

“I set another goal…a reasonable, manageable goal that I could realistically achieve if I worked hard enough. I approached everything step by step.”

After building a strong foundation based on the fundamentals of style, you’ll want to focus on goal-setting. We set goals for so many things in our life, so why not set them when it comes to your personal style?

What you don’t want to do is go from zero to sixty. Menswear and suiting expert, Tanner Guzy of Masculine Style often says that one of the most common mistakes men make when starting to dress well is that they overcorrect, leaving people around them baffled by their sudden change in appearance.

Don’t say to yourself that you will become a better dressed man tomorrow after going shopping for clothes that you think you need—it won’t work.

You won’t level up your style overnight. Just as Jordan didn’t become a champion and MVP overnight, you can’t change your personal style in a day or a week. It takes years of building habits and consistency to develop a personal style that is in line with your values and lifestyle. [Tweet this]

Focus On One Thing At A Time

The most important goal that you can set when it comes to developing your style is to focus on one thing at a time. Whether that’s finding a reliable tailor or picking up a few staples like a navy blazer, dark wash denim or clean white t-shirt.

Just as too many options make some people indecisive, too many goals can cause inaction. By being hyper focused on one goal at a time, you’re more than likely to hit each one and then be able to ease onto the next one.

Goal setting can be a powerful thing. The key is to take incremental steps, day by day, to get there. It’s a simple concept, but hard to follow through on. So remember—focus on one thing with style at a time and then show up and follow through. [Tweet this] Be a man of your word with your actions.

“Some people want it to happen, some wish it would happen, others make it happen.” [Tweet this]

So you’ve nailed the fundamentals and have set your goals. What next? It’s time to start taking action.

Really straight forward here. What separates a stylish man from a sloppy one is the ability to DO.

Jordan practiced relentlessly and outworked everyone else. In turn, he dominated his competition and willed his way to 6 rings. He didn’t say how many championships he was going to win, he went out and did it.

Talk all you want, but in the end it comes down to what have you done to become the stylish man you hope to become?

Experiment With Your Style

“I’ve missed more than 9000 shots in my career. I’ve lost almost 300 games. 26 times, I’ve been trusted to take the game winning shot and missed. I’ve failed over and over and over again in my life. And that is why I succeed.” [Tweet this]

Don’t be afraid to experiment. It’s an integral part in the development of your personal style. Do you find yourself leaning towards a particular style, but aren’t sure if you can pull it off? Try it out. Want to start rocking bowties or immersing yourself in the world of accessories, I say go for it.

If transformation is what you’re seeking, you’ll have to experiment to develop your style. [Tweet this] Embrace the uncertainty of trying on something new. If it doesn’t work for you, try on something else till you feel comfortable with what you’re wearing.

Fail Your Way To Success

Fail as often as you possibly can because that’s how the real growth happens. Successful people fail their way to success. Men of style dressed horribly before they dressed well. It’s a process. Take shots knowing you will miss most of them. You’ll fail, but you’ll grow.

When you experiment with your style, It might not work, but that’s okay. [Tweet this] As long as you tried and learned something along the way is all that matters.

“I’ve always believed that if you put in the work, the results will come.” [Tweet this]

The Power Of Consistency

Consistency is underrated. There’s a power in consistency. When you start to take action on a consistent basis—actually put in the work to become better dressed—you will eventually get there.

My key advice is to practice daily.

Try this for a week…spend 10 minutes to consciously think about what you’re going to wear for the next day, instead of haphazardly piecing together an outfit the morning of.

It’s little, focused efforts like this that will help for you to incrementally improve your style. In time you will become more adept at putting together an outfit you’ll be excited to wear.

You’ve got to show up no matter what. No matter how you’re feeling. Even if you’re not motivated to do it. Know your end goal and do whatever it takes to get there.

Learn to Love the Journey

You don’t have to love menswear, but it’s beneficial to care about what you wear and how you present yourself to the world.

Treat your style journey like a first person shooter. You’re going to get killed, but you’ll respawn and then do it over and over, and over again until you get better and better. Play, have fun, and enjoy the journey to better style. [Tweet this]

Life is a journey to be enjoyed. Your style, whether you like it or not is a journey too. Life will be easier if you embrace and learn to love the journey.

It’s Never Too Late to Work on Your Style

“My father used to say that it’s never too late to do anything you wanted to do. And he said, ‘you never know what you can accomplish until you try.’” [Tweet this]

The best time to have planted a tree was a hundred years ago, the next best time is right now. Your style won’t grow all by itself.

Developing your personal style is an evolution of:

To quote a lyrical genius, “Look, if you had one shot, or one opportunity. To seize everything you ever wanted, in one moment. Would you capture it or just let it slip?” It’s never too late. But what if you only had one opportunity? Don’t let it slip. Begin now.

Who knew how much we could learn about style and life, just by trying to Be Like Mike?

What’s your favorite lesson that can be learned about style from the GOAT?