Welcome to Gentleman Within’s first edition of Styling Cinema™, a series where I attempt to refresh/modernize stylish outfits from the movies.

Part 1 features the worldwide cultural phenomenon, Back To The Future, and all of its superb styling. 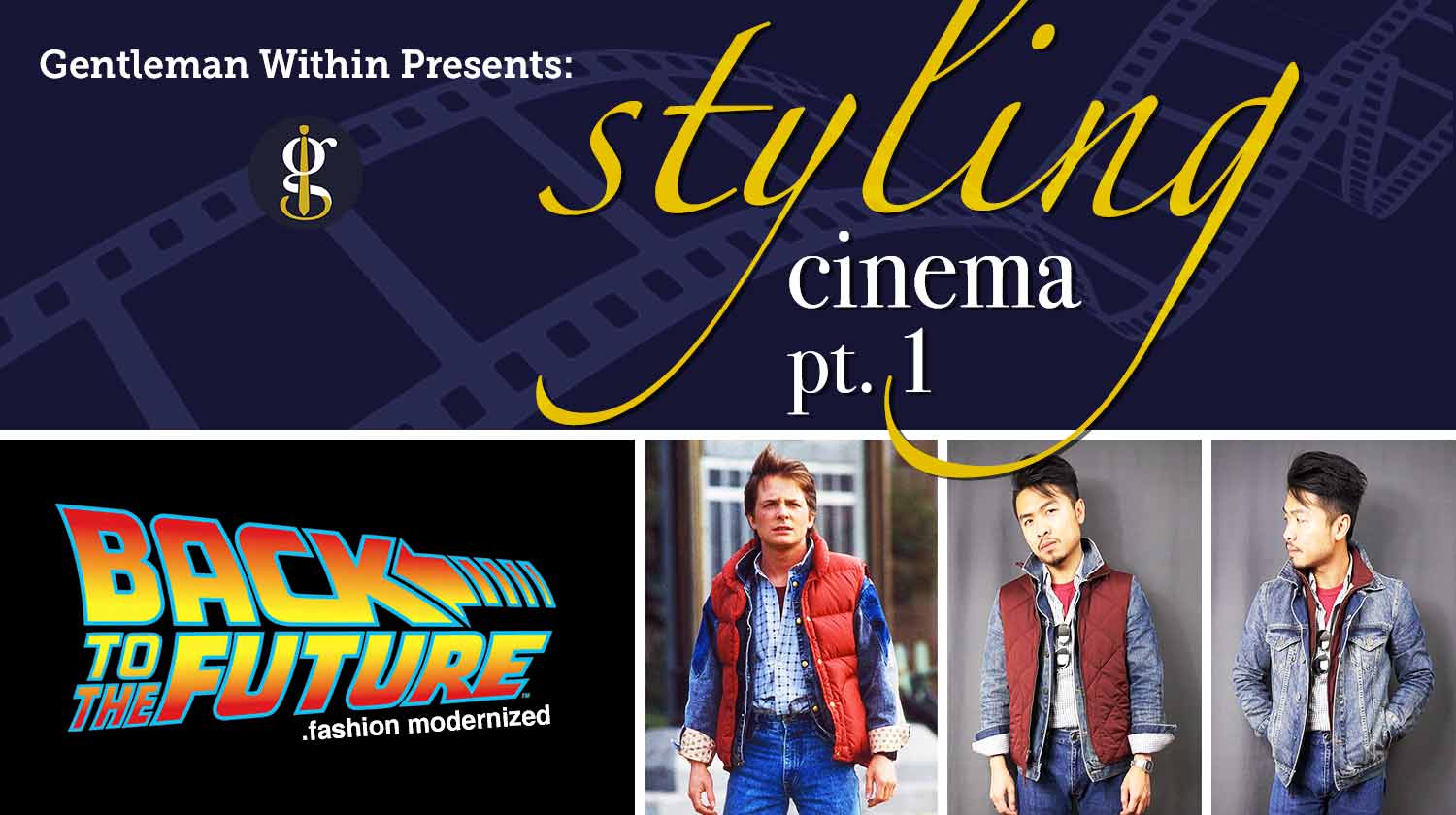 I thought it would be fun to put my spin on some of the iconic looks from the movie using articles of clothing and accessories that I have in my own closet. And more importantly I wanted the outfits to be wearable.

Back To The Future is still as popular now as it was when the trilogy was released all those decades ago. Plus it’s undeniable that the fashion in those movies are quite memorable. Who can forget Michael J. Fox as a young Marty McFly, rocking those self-lacing Nikes (they’re real) with his hoverboard or orange puffer vest?

And so, without further ado, Styling Cinema Pt. 1. Enjoy!

Back to the Future Outfits (Lookbook)

Here’s my take on the outfits from the original Back To The Future. For reference, I’ve provided links to all the pieces I’m wearing below, so feel free to shop the looks.

This Marty McFly outfit is probably the most iconic of them all. Everything from the vintage wash denim jacket and faded dad jeans, to the orange puffer vest, looks as good now as it did back in ’85. A Canadian tux is usually a fashion faux pas, but there’s no denying Marty McFly was FLY AS HELL in that outfit.

I stayed pretty true to the original here, but I did take some liberties with the puffer vest, opting for a lighter and more modern quilted vest (J.Crew Factory Walker Vest) in burgundy, which is more wearable than orange IMO. 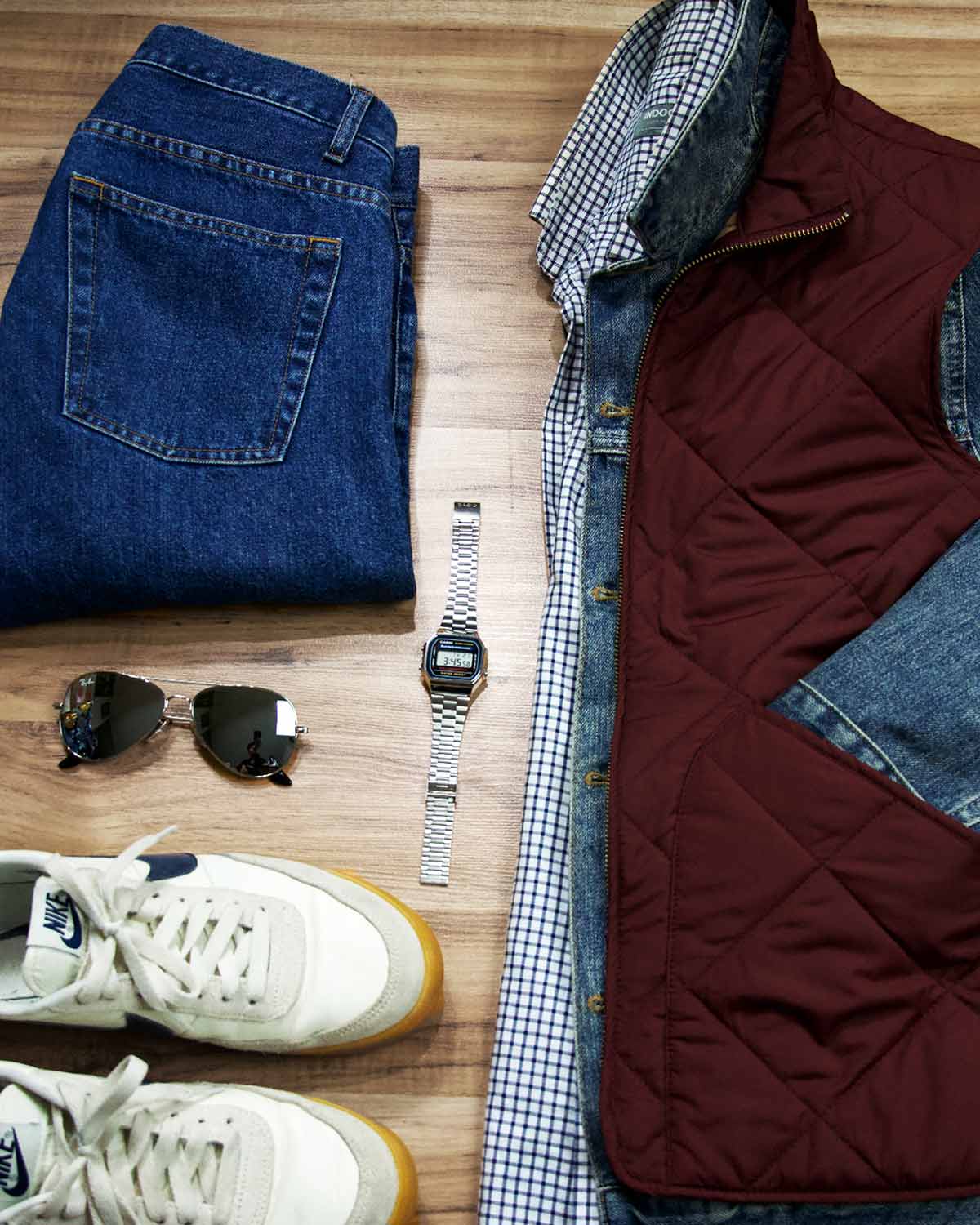 For shoes, I went with iconic tennis sneakers with a blue swoosh instead of Marty’s red. They’re the wildly popular Nike Killshot 2 which was originally released in the ’80s and saw a surge in interest when it re-released in 2009, and subsequently in 2014 in collaboration with J.Crew.

Finally, I finished off the look in style with classic aviators and a retro watch. It’s no flux capacitor, but the silver finish is a nice touch, ain’t it? The only thing missing is my DeLorean. Maybe someday…

Oh Biff — the mild mannered, charismatic antagonist of the Back To The Future trilogy #sarcasm.

I didn’t like his grey colored bomber jacket and so I went with my two tone, navy and black bomber that gives off a varsity vibe. Underneath I stuck with his black button up and grey tie. Instead of silk, I opted for the knitted kind, which is much more modern and stylish IMO. 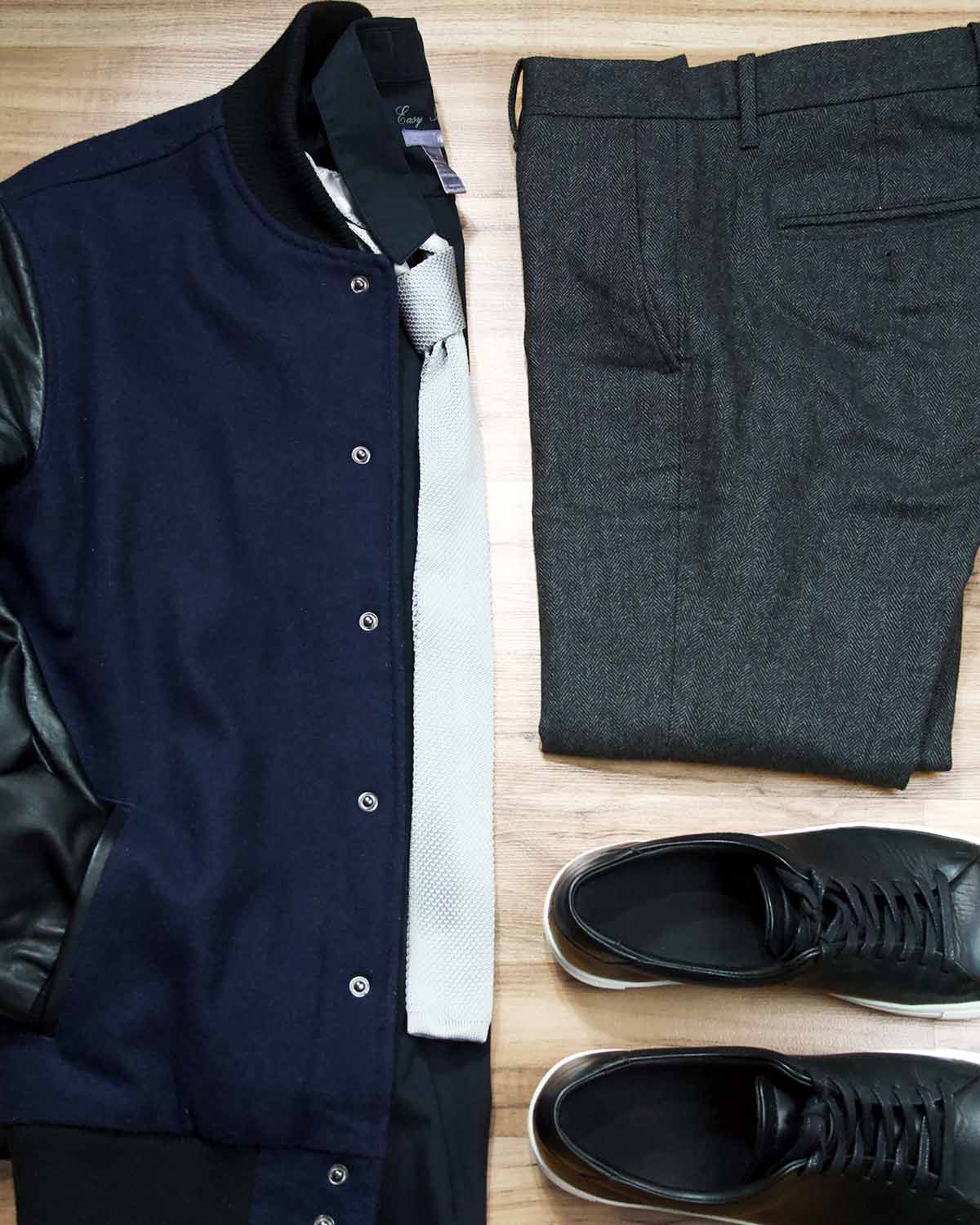 I normally wouldn’t wear such a contrasting shirt tie combo, but Biff seemed to like it. For the pants I went with tailored wool (herringbone) trousers. And for the shoes, black leather with white soles to complement the shade of the knit tie.

All in all, it’s not something I’d rock for prom night, but it’s a nifty fit. I’d swap the grey tie for something darker that plays well with the overall monochromatic look.

Now it’s onto the timid George McFly, afraid to take even the tiniest daring step — heck he didn’t even change his haircut for 30 years!

This isn’t a character teardown, though. Here’s what I thought was his best outfit from the movie. Okay, the white suit was nice, but I don’t have a white tux.

For this outfit, George is wearing super short, cropped (what looks to be) a navy harrington jacket with a normal collar. I went for the more contemporary funnel neck harrington and a light grey oxford button down shirt underneath (buttoned all the way up, just like George). 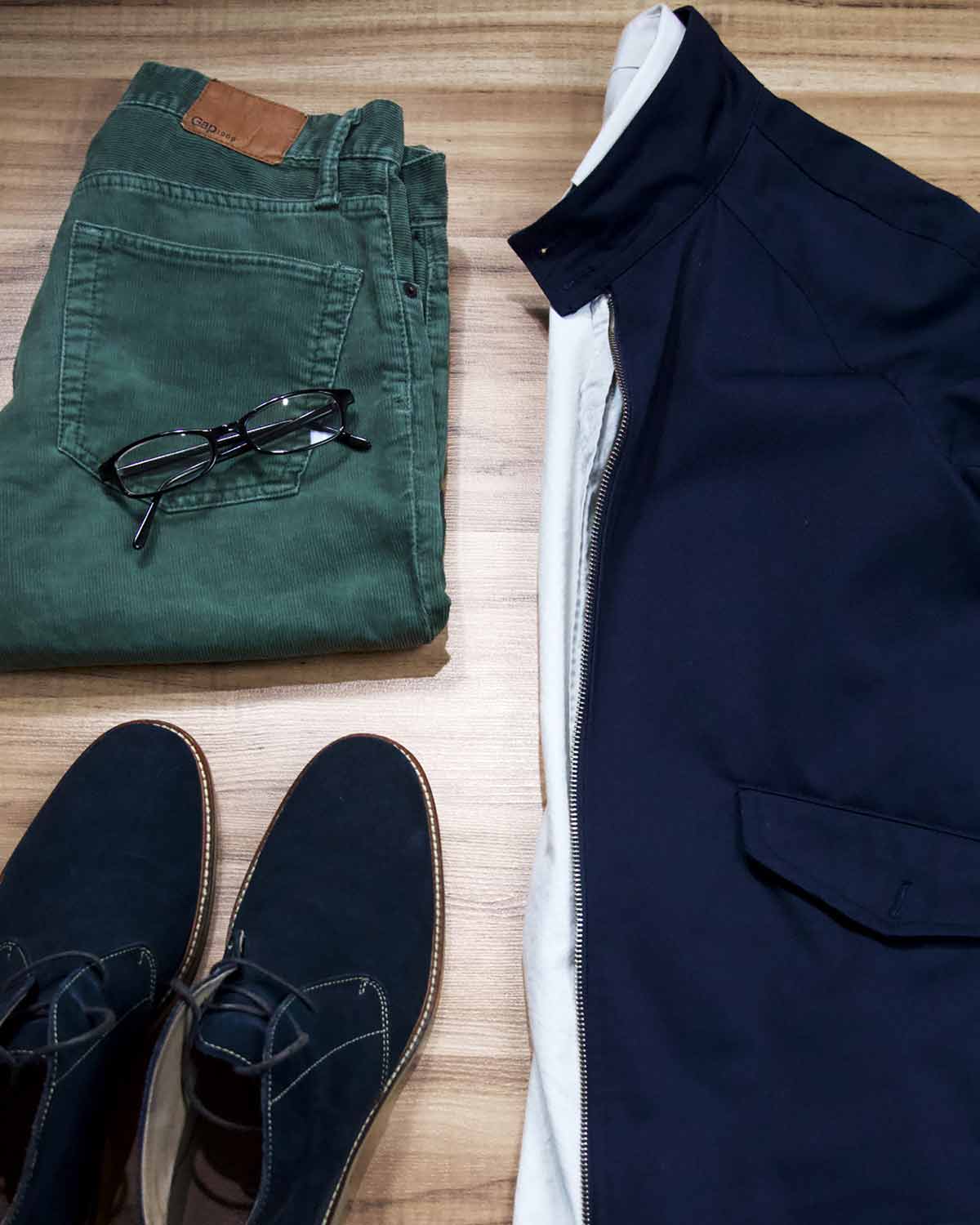 For the pants, it looks like he’s wearing green corduroy and so I pulled out a pair from my closet. And for the shoes, I choose navy, suede chukka boots, a timeless classic that matches the color of the jacket.

Finally, I finished the look off with those nerdy black rimmed glasses that I bought from Hot Topic my senior year of high school when I was getting into that ‘hipster’ phase (sigh).

Last, but certainly not least is Doc Brown, the effervescent inventor of the first time machine, built out of a DeLorean sports car.

Often in a state of shock and awe, Doc had some questionable outfits throughout the series. One fit, however, caught my eye and it was the one that I decided to try and emulate.

It looks like he’s wearing a khaki/grey-ish chore jacket without pockets and a funky patterned polo shirt with a black contrasting collar. I decided to put a little twist on the outfit and go with a khaki trucker jacket and thin striped polo with a contrasting blue collar underneath. 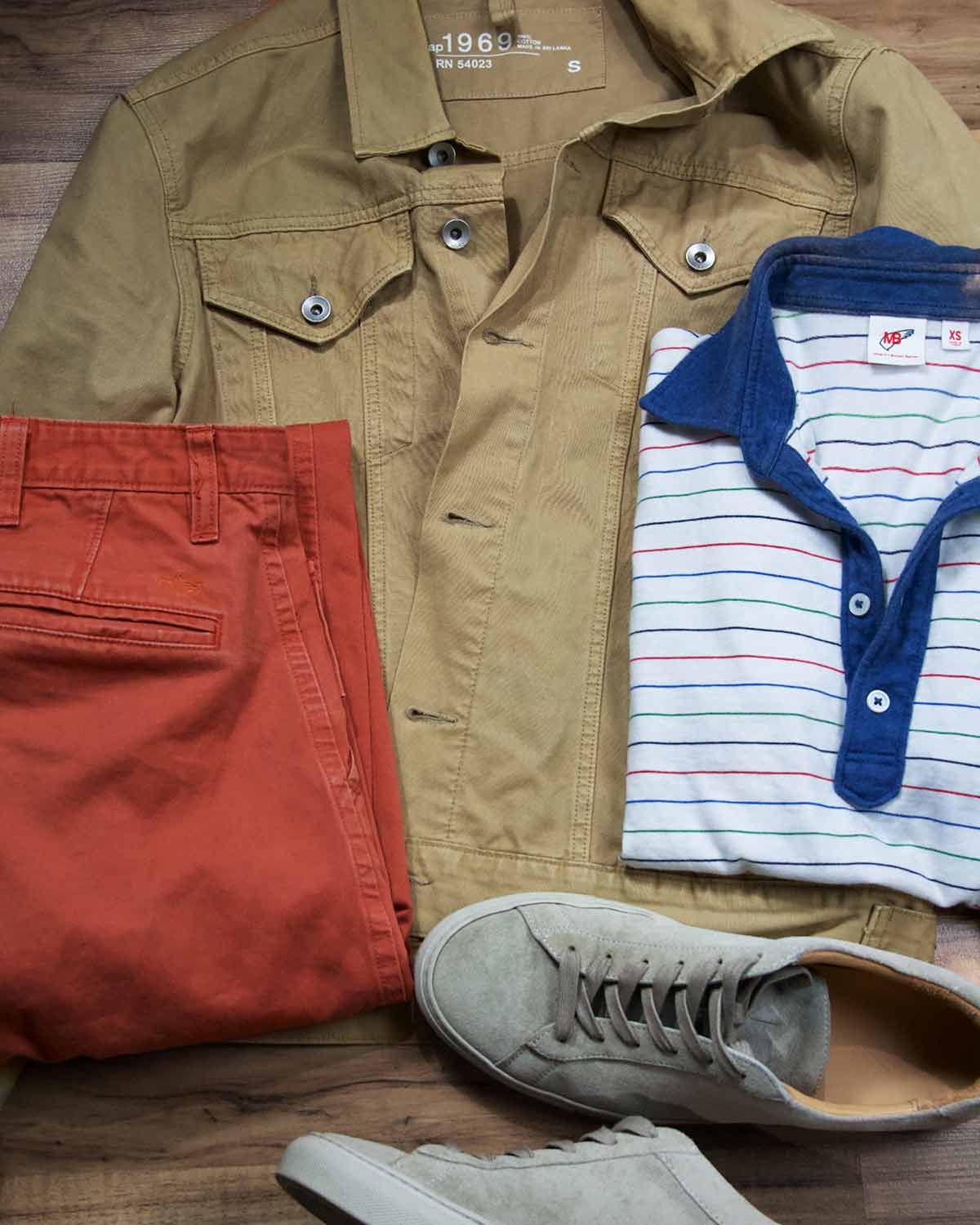 I couldn’t really see the trousers, but it looks like tweed and a hint of orange? And so I knew it was time to bust out my fire — no wait — ochre chinos. A bold statement for a bold man. And finally for the footwear I landed on a simple suede minimalist sneaker.

There you have it, my 4 recreated and refreshed outfits from the culturally significant Back To The Future franchise. I wanted to end this on an inspiring note. Here are some wise words from Doc Brown at the end of the third film.

“…your future hasn’t been written yet. No one’s has! Your future is whatever you make it. So make it a good one!”

Ultimately, our destiny is up to us, to make of it however we choose. Sure we can’t pick the hand that we’re dealt, but we can decide how we play our cards. Whatever you do, make it a good one!

What should be the next installment of this Styling Cinema series?

Looking forward to seeing you in there.