Everyone follows trends and if someone tells you they don’t, well then they might as well be naked. 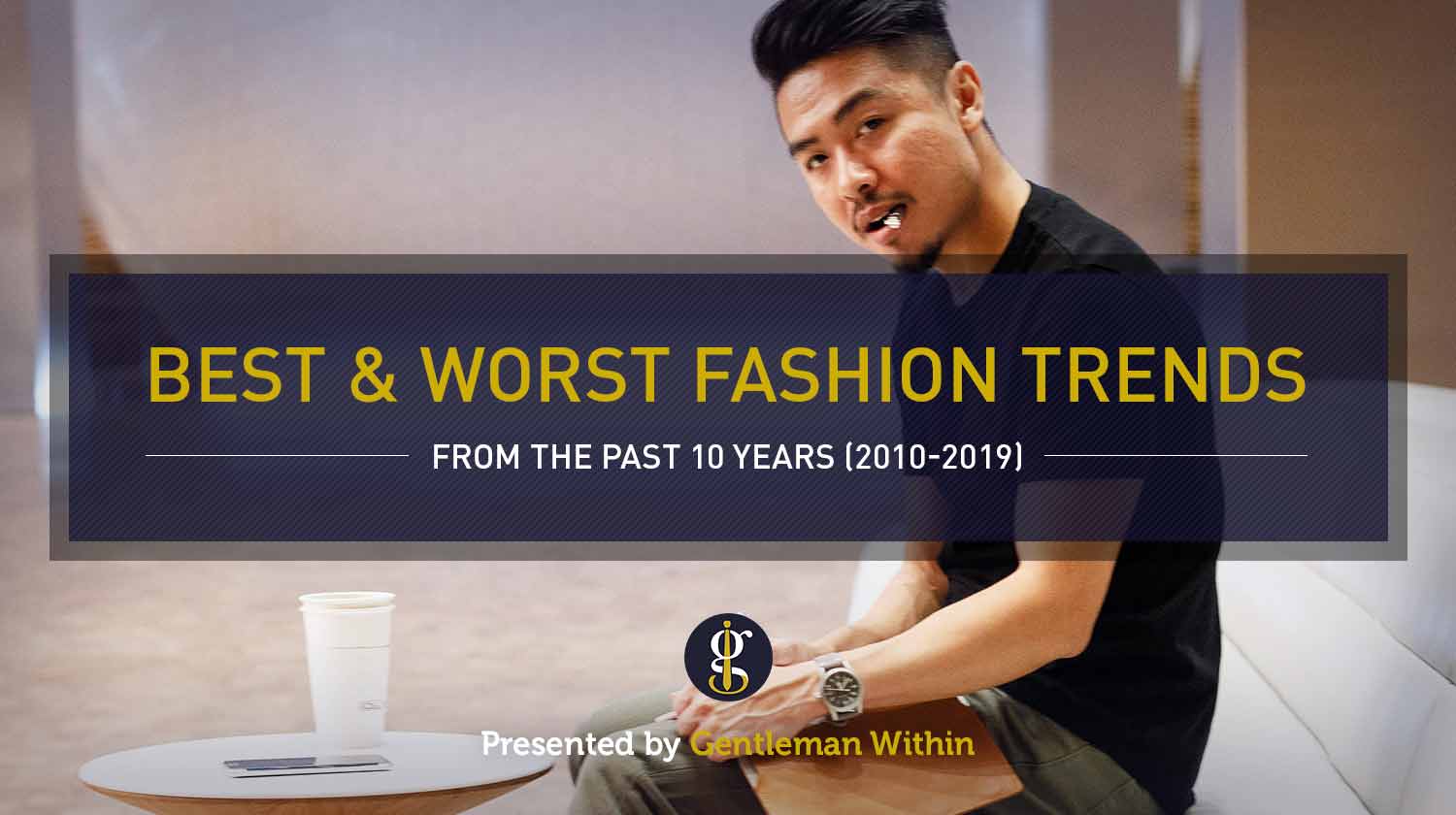 Over the past decade we’ve seen a myriad of men’s fashion trends come and go, some are still going strong and some on their way out.

In this article I’d like to run down my list of 20 of the best and worst men’s style and fashion trends from the past 10 years. In the 2010s, we saw everything from male rompers and pretentious accessories to minimalist and sustainable fashion.

Now let’s get to it, starting with the worst.

Distressed denim can be cool, in fact I started wearing it again in 2019 after a decade of shunning them. But what’s not cool is so much distressing that it looks like a hurricane ripped through your jeans. 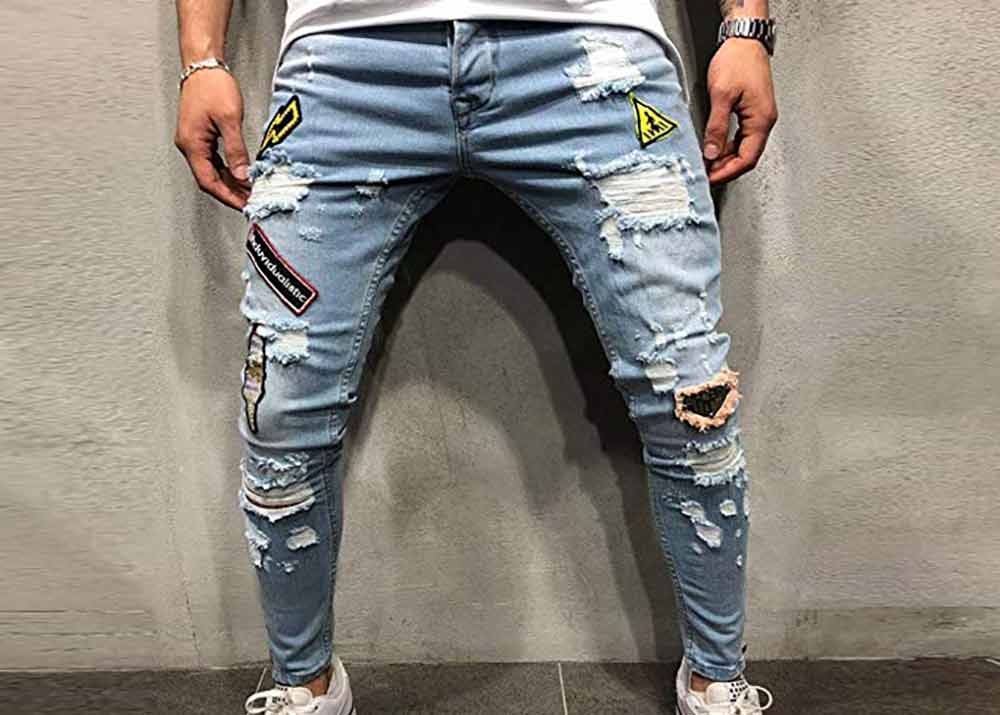 The overly distressed denim trend took both the women’s and men’s fashion world by storm in the 2010s. Thankfully this is one that’s back on its way out as more tastefully distressed styling will take hold as we welcome the new decade.

Not gonna lie, I almost bought into this trend in the past decade. They call them Crossbody bags, but let’s face it, they’re fanny packs and the fanny pack has never been cool — ever. 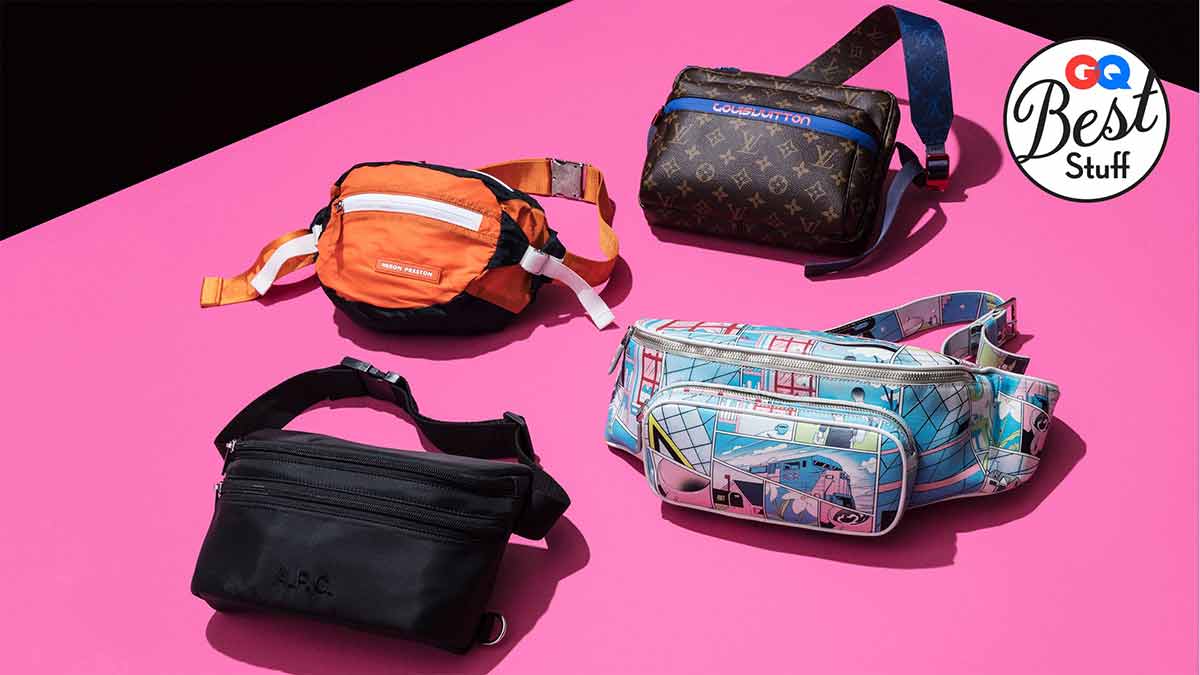 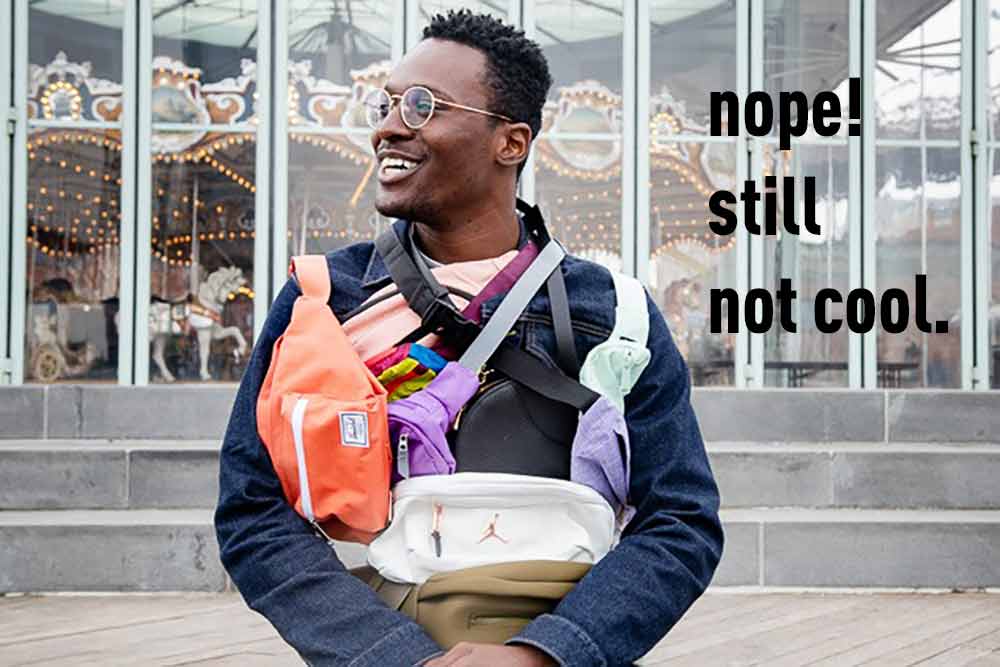 The major mainstream menswear publications will try to tell you otherwise, but I wouldn’t listen to them. It doesn’t matter if you wear it around your waist or across your body, a fanny pack is a fanny pack and this is one trend that we hope is buried in the next decade.

The bucket hat has seemingly been on a tear in 2019. Every fashion outlet has been talking about them as the new “It” summer accessory. It was seen among the crowds at London Fashion Week and New York Fashion Week for men and women alike. 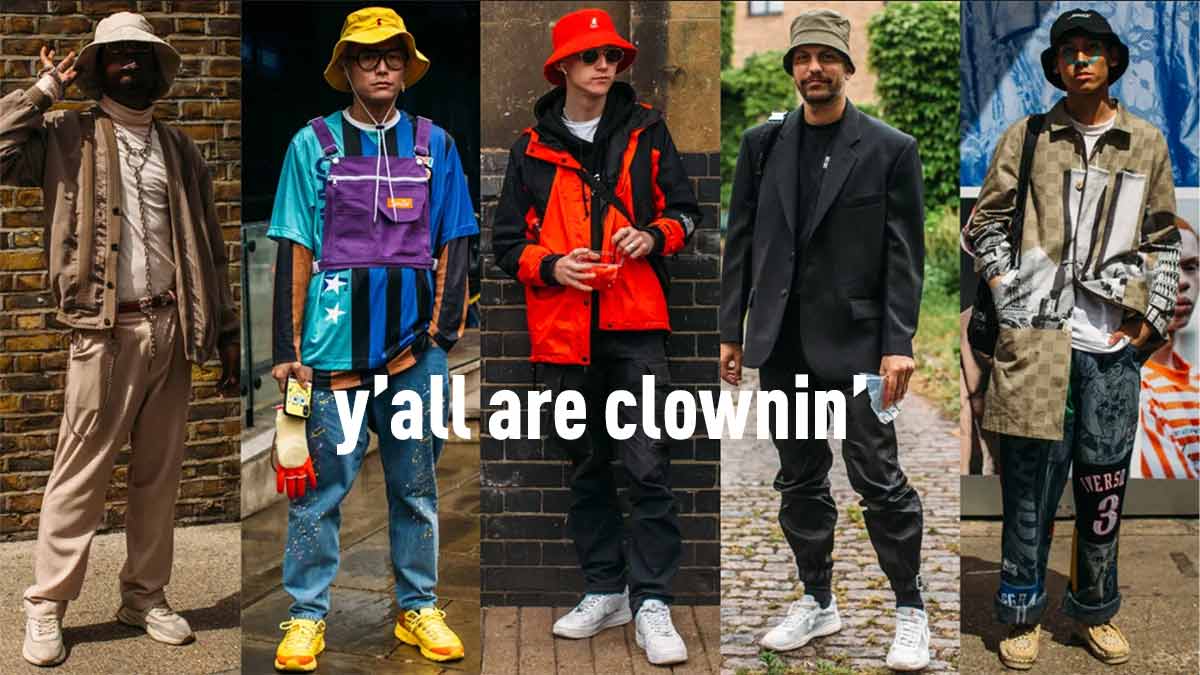 It’s not a very flattering style in my opinion. Okay, it may help give you sun protection, but beyond that it just doesn’t look cool no matter how much GQ or Esquire says so.

The Balenciaga Triple S sneaker is the poster child for chunky sneakers everywhere. Chunky sneaks are the ugliest of the uglies when it comes to sneakers. Another one is the sock sneaker, also popularized with Balenciaga. 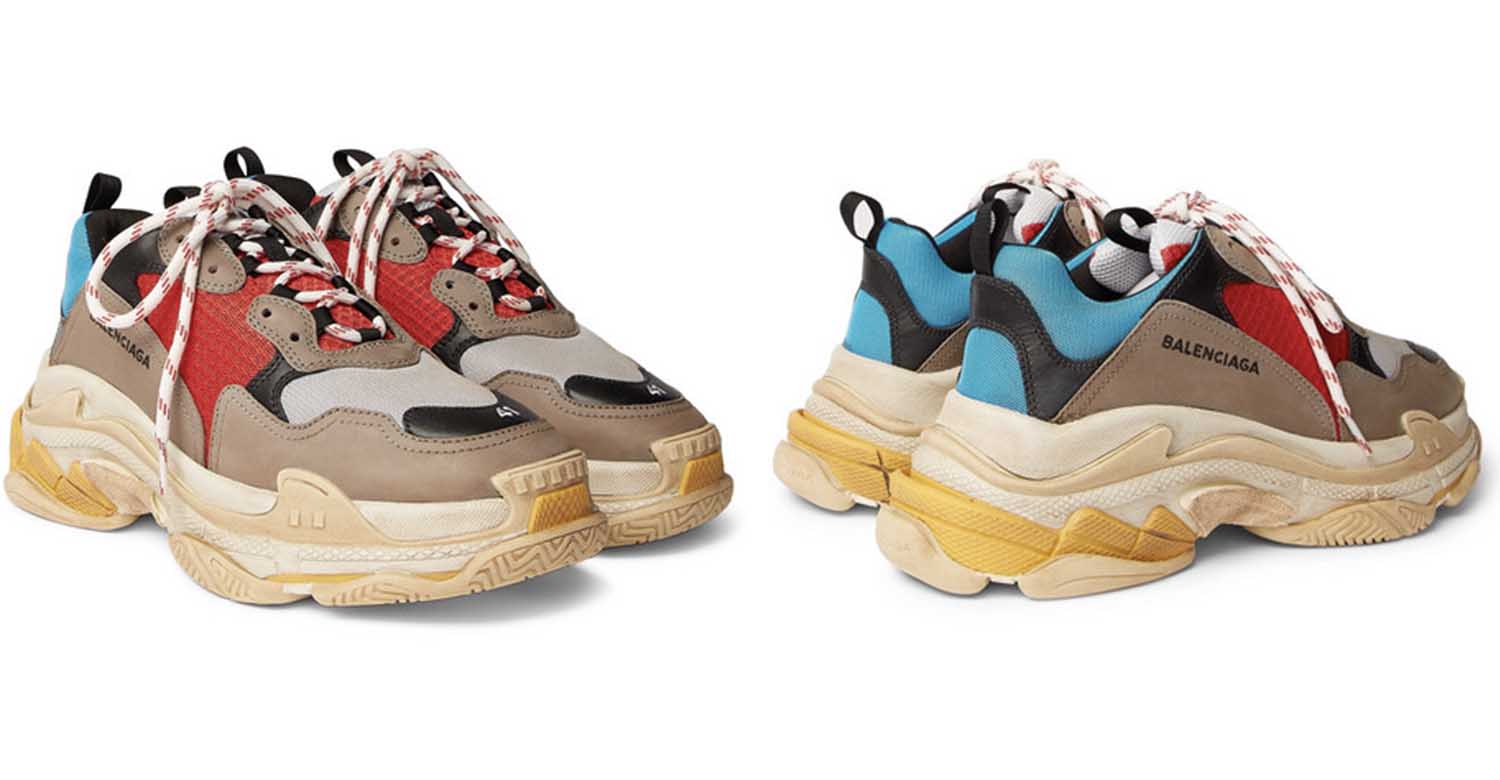 Both the chunky ugly sneakers, and sock sneakers trend should be fading since streetwear is over in 2020, according to Hypebeast king Virgil Abloh.

Remember the male romper aka the romphim? It went viral back in 2017 and was all that the mainstream media were talking about in men’s fashion. While they may look flattering on women, they’re not so flattering on dudes. 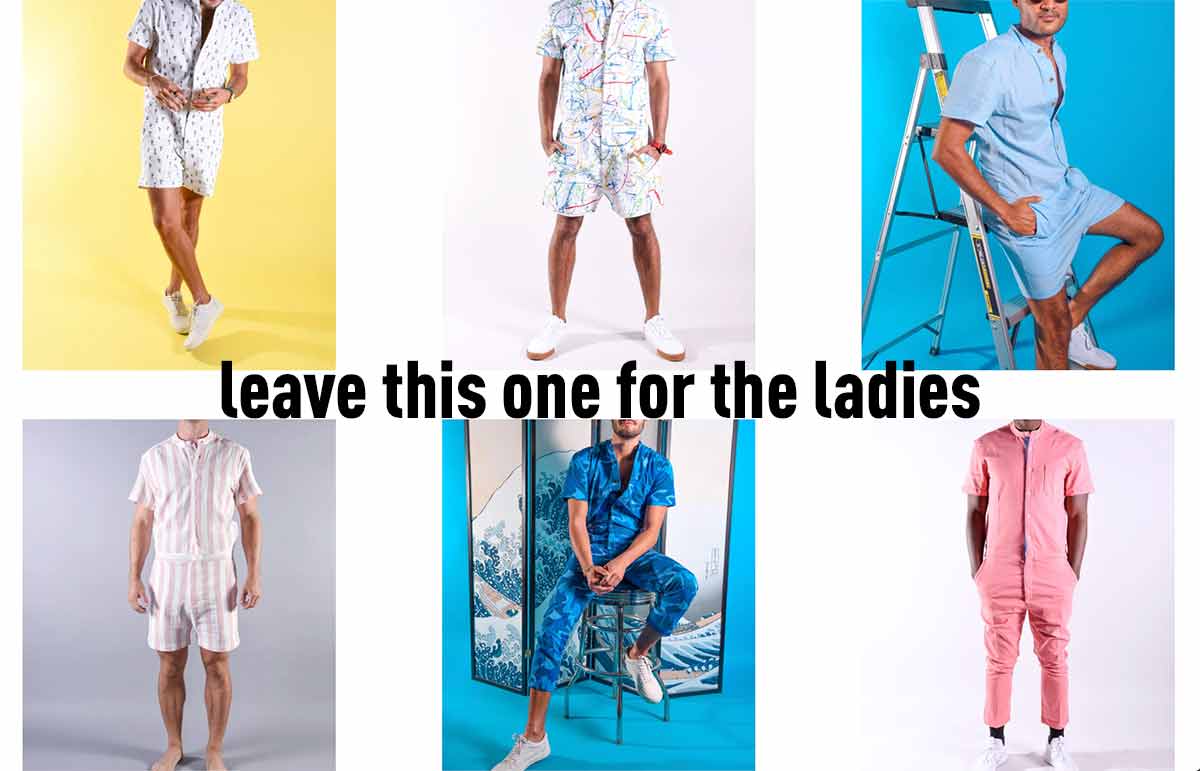 It’s childish, goofy and a way to play up the frat bro persona and does not belong in the stylish modern gent’s wardrobe.

In the 2000s, nothing said basic white girl more than a pair of UGG boots. Now in 2019, it’s the men’s turn. I’ve been seeing lots of guys, particularly teenagers rocking UGGs these days. If you want to be seen as a “cool teenager” UGGs are for you. 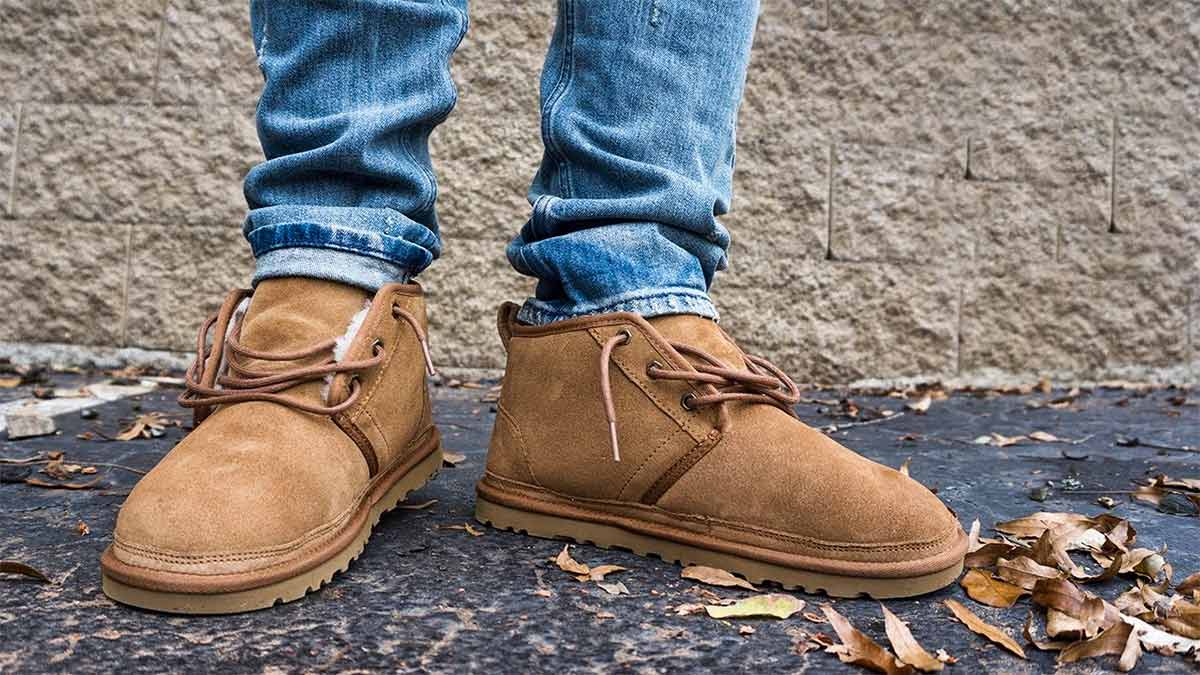 And while they’re cozy and comfortable, they don’t offer much else. And so, if you’re wearing them for comfort go right ahead, no one’s stopping ya. But for style, you’re best off looking elsewhere. 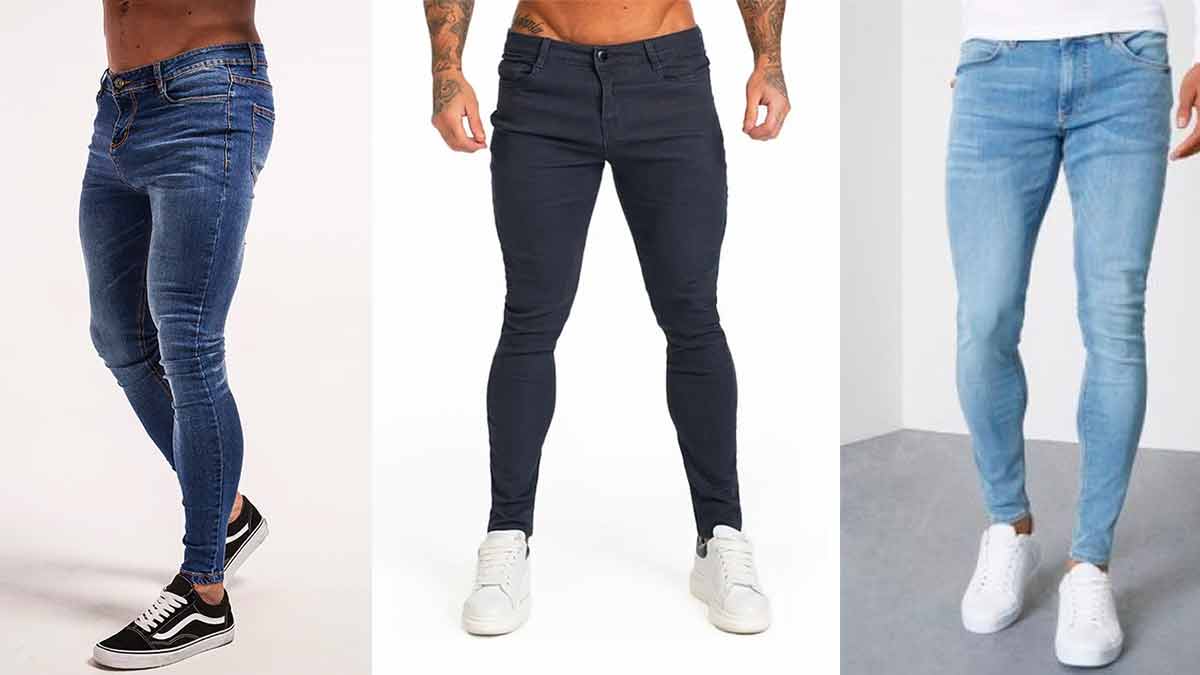 For the ladies, yes. For dudes? Hell nah. We get it, you like to work out and you want to show the ladies what you’re working with. FYI, most women will probably find it repulsive. This trend is one that I hope dies a fiery death and doesn’t ever rise again from the ashes. 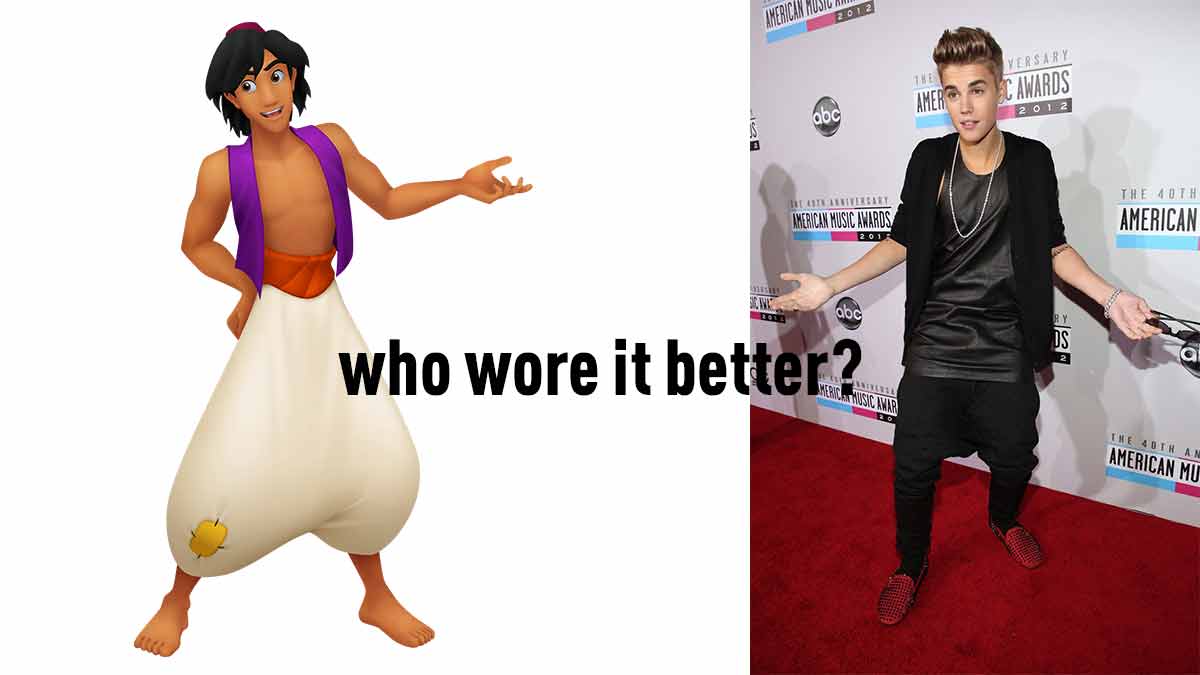 Aladdin’s pants of choice makes the list of worst fashion trends in the 2010s. Justin Bieber wore them too. It’s oddly shaped and makes you look like you’re wearing a sagging diaper. It’s simply not a good look.

It’s not so much the statement scarf itself, just the way that people chose to wear them. And by people, I mean Cam Newton of the Carolina Panthers. C’mon man, it’s just an absurd look. 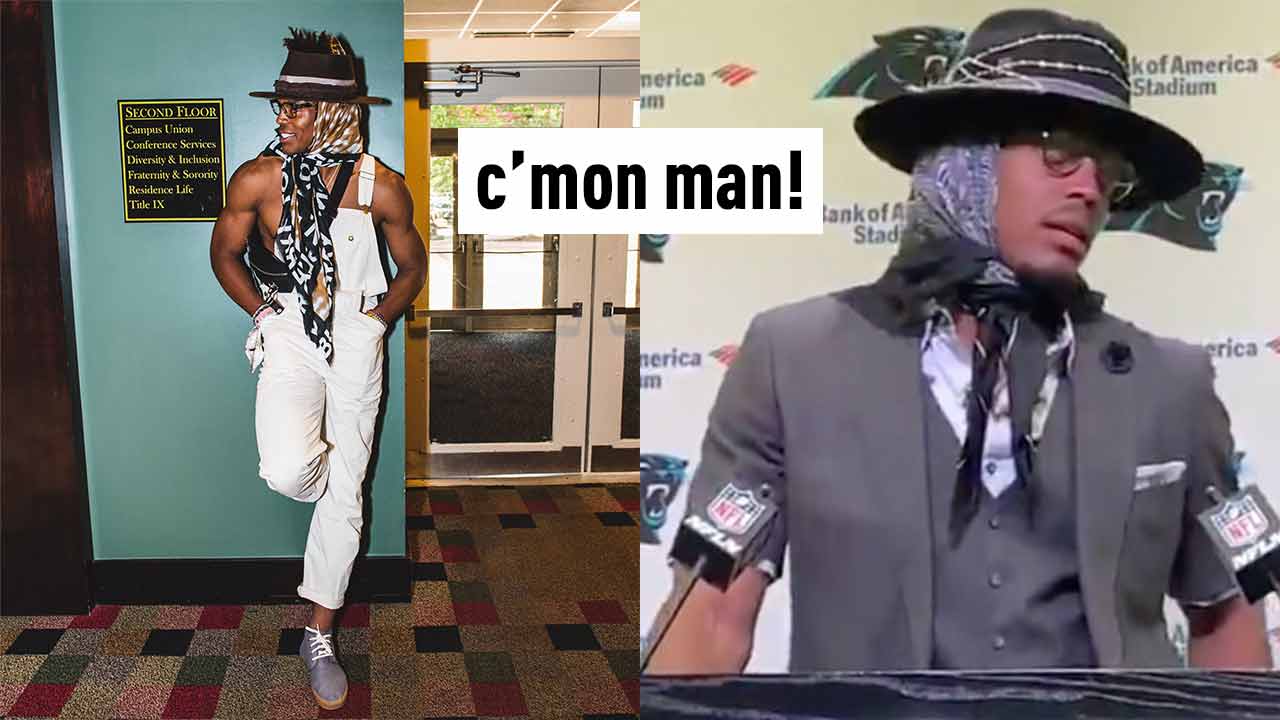 Actually, anything Cam wore in 2019 makes my list of worst style trends.

Out of the gate, Airpods have become Apple’s second best-selling product of all time. Millennials love them, in fact it’s become a status symbol if you can believe it, heh.

So they’re functional and can pair with your phone, great. They don’t make you look any more stylish though, and you aren’t as cool as you think you are by wearing them.

Men’s athleisure style is a trend in the 2010s that was done right. And there are quite a few new brands that have capitalized off of this, from GAP’s Hill City to direct to consumer brand, Public Rec.

And of course the household names like Nike, Adidas and Reebok have all embraced the omnipresent trend. With the rise of athleisure in the 2010s, athletic wear is no longer confined to the gym, but a part of casual, cool and comfortable, everyday wear.

One of my favorite trends right now is minimalism. And it’s popular as ever, perhaps the most popular trend on this entire list. These days people are simplifying their lifestyles and decluttering their homes with the KonMari method, popularized by Mari Kondo of Netflix fame.

In men’s fashion, minimal, basic styles are some of my favorite. Sometimes you just want to wear a classic t-shirt with a pair of jeans and clean white trainers. As long as the fit is on point and the colors neutral (for the most part), you’ll effortlessly nail the minimalist aesthetic. It’s easy, it’s stylish and there are plenty of ways to inject a little bit of personality and flair.

They say that trends will cycle every 20 years or so. It’s just enough time to pass for the nostalgia of our younger years to hit us in the face like a ton of bricks. 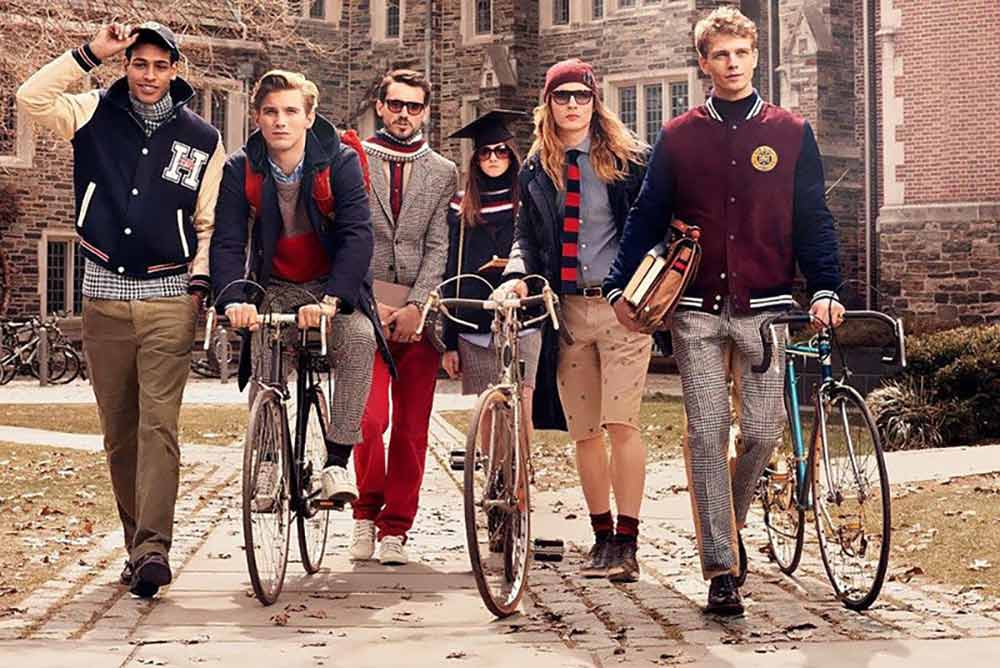 And so it’s no surprise that 90s fashion came roaring back in the 2010s, mostly anchored by the streetwear crowd. Modern preppy became cool again, tennis shoes like J.Crew’s Nike Killshot 2 (actually from the 80s) became everyday sneaker staples and even grunge style made a comeback thanks to the hypebeasts.

The minimalist white sneaker is a shining beacon of hope for sneaker trends everywhere, and the perfect juxtaposition to the chunky dad sneakers trend.

In the 2010s, minimal trainers rose to new heights thanks to the likes of the popular, yet pricey Common Projects Achilles Low and other more affordable sneakers like Adidas’ Stan Smith.

The beauty a clean pair of low top leather sneakers is that it’s the perfect shoe for casual and dressier outfits alike. It’s this versatility that catapulted them as mainstays in stylish men’s wardrobes everywhere.

Today brands such as Greats, Koio, Ace Marks, Beckett Simonon, New Republic and Oliver Cabell offer their own versions. There’s no end in sight for this trend and I don’t see it going away anytime soon.

Smart casual style is my go-to uniform of choice. If I had to choose one aesthetic to wear, it would be a blend of smart casual with elements of street wear, a high-low kind of approach. 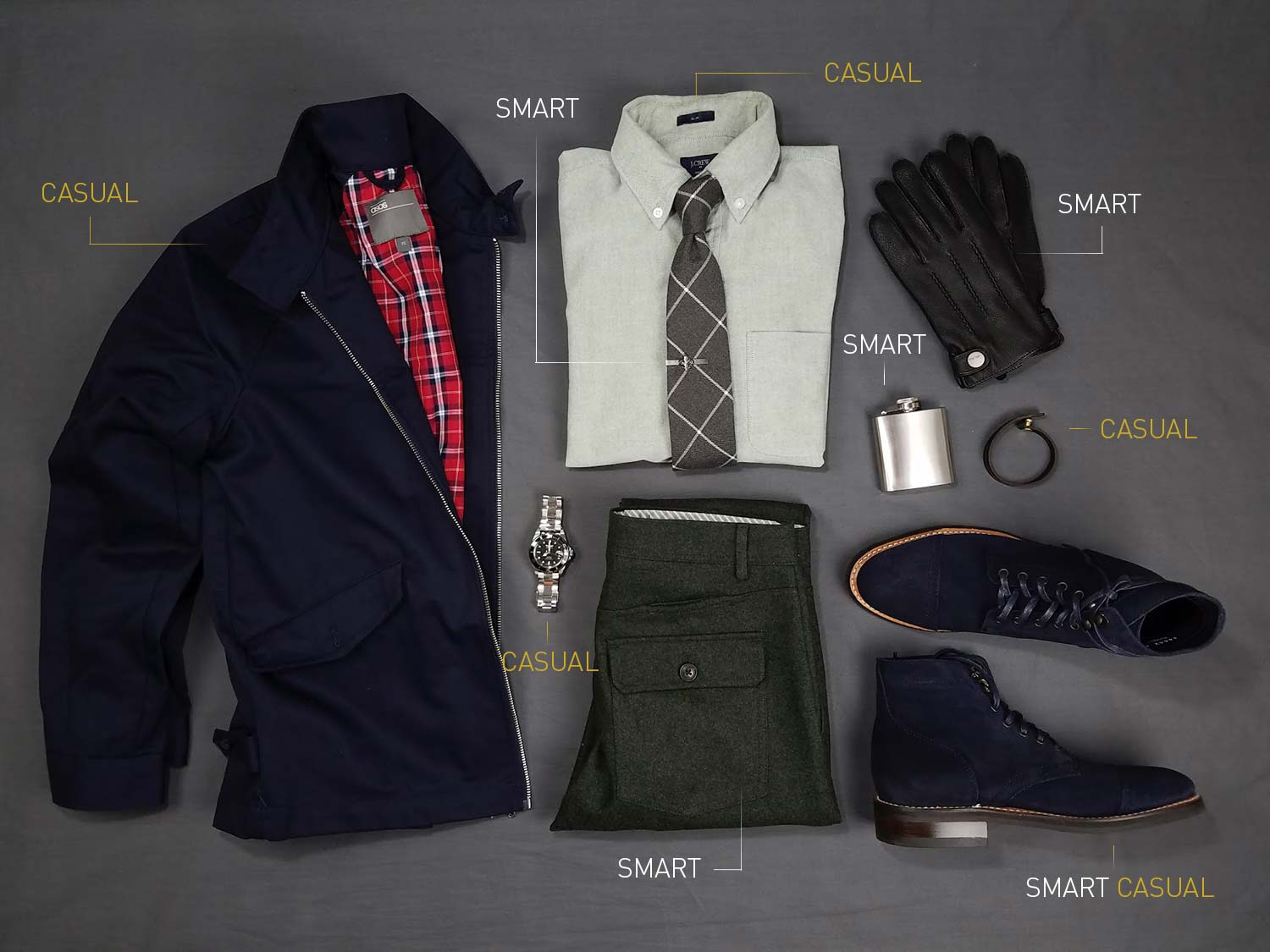 In this past decade, business casual and smart casual style reigned supreme right up there with streetwear. Smart casual is the perfect harmony of dressier pieces paired with more casual pieces. Think an unstructured gray or navy blazer, dark wash denim and leather chelsea boots.

It takes a little bit of practice to pull off, but in time, becomes effortless. And smart casual is the one style that for 99% of the places you go, you’ll be dressed for the occasion.

With fast fashion running amok with low quality clothing that’s filling up our landfills, the 2010s saw a shift in mindset. Much like sustainability in the foods we eat, more and more people became conscious of the clothing they wear, where and how it’s sourced.

Brands took note and the sustainable fashion trend skyrocketed in the past decade with brands like Everlane, PACT, Nisolo, Outerknown, and Patagonia among dozens of other companies focused on sustainability and ethical fashion.

This is one trend that I hope continues to rise in 2020 and beyond because it’s not only good for consumers, but it’s going to make the world a cleaner more livable place for future generations to come.

Normcore is an aesthetic that embraces sameness and expresses no individuality; it’s simply blending in. Stylized blandness if you will — so say the pretentious.

It’s got a bad rep, but I don’t think it’s all that bad. In fact I think it’s perfect for people who are interested in learning how to dress better.

Normcore is a lot like minimalism in that there are no logos or brands and it features mostly neutral colors. It’s basic style at its finest, and what’s so wrong about simplicity? Don’t let the other online fashion magazines steer you wrong, normcore is worth embracing.

If you’ve been on the Male Fashion Advice (MFA) subreddit, it’s like their version of “The Basic Bastard.”

The baseball cap, aka dad hat was trending heavily over the past decade. It’s another vintage piece that cycled back and became popular again.

Celebrities embraced the trend for sure, and even I got into it. I like the way it looks, it’s much more versatile than a snapback or flat brimmed fitted hat, which lean much more casual and geared for streetwear styles.

It’s a major piece of the dad in latest fashions trend aka the DILF. It’s perfect to be worn casual with a basic t-shirt or hoodie and even dressed up with a blazer.

9. Turtleneck Under A Blazer

I happily experimented with this trend in the past decade because, why not? I’ve taken a liking to turtlenecks over the past few years because of their functionality and ability to dress up any outfit. These days I not only wear them under my blazers, but button downs and sweaters too. Just not like this.

From musicians like Drake and Post Malone to ESPN’s loudmouth (no disrespect) Stephen A. Smith, it seems the turtleneck under a suit jacket trend has trickled down to the masses. I’ve been seeing so many TV anchors and sports analysts wearing this trend lately.

You know what that means, it’s just about dead! But it was a fun trend while it lasted. And I still think it’s a great, refined look.

Ah, the trusty American classic blue jeans. It’s really hard to go wrong here. Jeans have always been in style and will remain most people’s bottom of choice when it comes to casual style.

Inherently durable and with stretch — comfortable, denim is a workhorse that will get plenty of mileage in anyone’s wardrobe. It’s a trend that is here to stay in 2020 and well beyond.

And there you have it, my complete list of the best and worst fashion trends from the past decade (2010-2019).

Whether you partook in some or most of these, just know that fashion is a cyclical beast and what’s new was once old, vice versa. Nothing is ever new and original.

Most importantly, you’ve gotta wear what you love and don’t pay too much attention to trends! 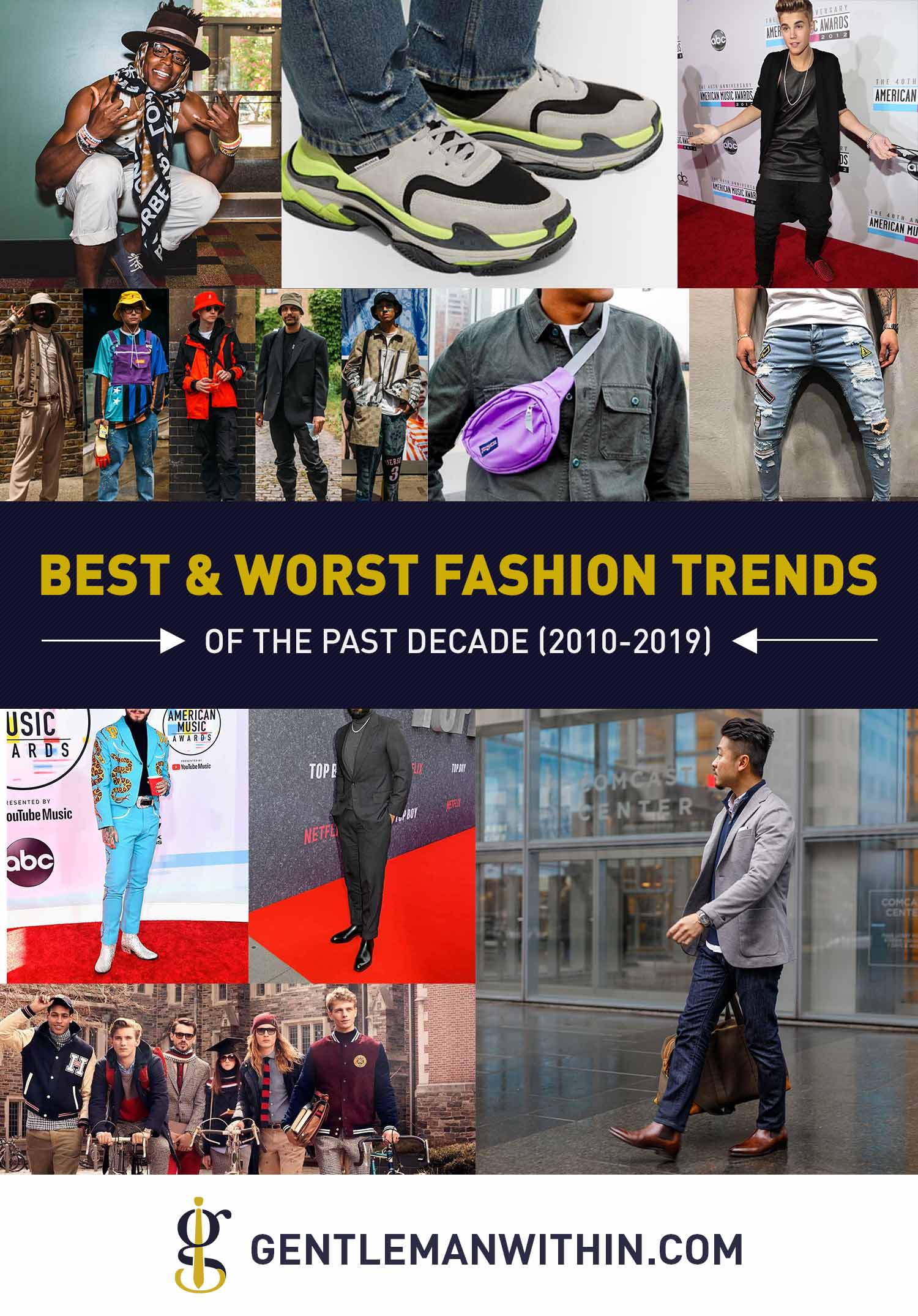 Did I miss anything — what fashion trends are on your list?